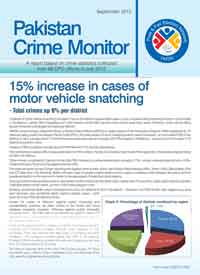 The report released on Wednesday said Lahore (92), Faisalabad (91) and Karachi Central (68) had the most vehicle snatching cases. However, motor vehicle lifting figures remained unchanged (34 cases per district), it said.

The data shows criminal misappropriation cases increased – up from seven FIRs in two districts to 33 in a single district. Criminal trespass cases also saw an increase, 651 FIRs lodged in 29 districts – going up from 410 cases in 23 districts recorded in June.

However, FIRs for robbery and dacoity and theft declined 14% and 5% respectively.

The monitoring revealed a 6% increase per district in FIR numbers. Ninety nine districts had 46,346 FIRs registered – the previous figures being 42,780 in 97 districts.

‘Other crimes’ constituted 61 percent of the total FIRs, followed by crimes pertaining to property (17%), crimes involving physical harm (12%), threat and fraud (7%) and crimes against women (2%).

The regional break-up had Punjab reporting the highest crime burden (64%) with Khyber Pakhtunkhwa (20%), Sindh (13%), Balochistan (2%) and ICT (less than 1%) following. Better outreach, lack of parallel judicial systems and a higher confidence level between the police and the people are said to be the reasons for better crime reportage in Punjab than other regions.

Similarly, accidental death cases increased from 223 in 51 districts to 253 in 50 districts.  However, hurt FIRs fell 3%. Also registering a drop were terrorism and accidental death (qatl-bis-sabab) cases – both down from four FIRs per district to three.

Except for cases of offenses against public tranquility and counterfeiting currency, all other crimes in the threat and fraud category remained constant.

Offences against public tranquility increased 41% – 187 FIRs filed in six districts as against June’s 110 reported in five. Counterfeiting currency cases decreased 6% – from 47 per district in June to 44.