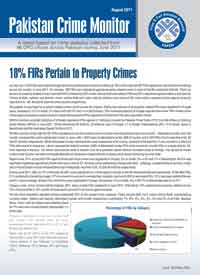 Crimes of theft, robbery and dacoity, motor vehicle theft and motor vehicle robbery were some of the most widely reported crimes against property reported in 57, 46, 43 and 42 districts of the country respectively. The pattern of reportage for property related crimes varied across the regions. Eighty four percent of all property related FIRs were registered in Punjab alone, followed by 12% in Sindh, 2% each in KP and ICT and 1% in Balochistan.

The monitored districts of Punjab reported more than 70% of each of the crimes against property except extortion. Eighty three percent of the registered 23 extortion FIRs were reported in Sindh. FAFEN monitors collected statistics of officially registered FIRs against 27 offences covered by Pakistan Penal Code (PPC) from 66 offices of districts police officers (DPOs) in June 2011.

Of the monitored 66 districts, 28 districts were in Punjab, 17 in Khyber Pakhtunkhwa (KP), 13 in Sindh, seven in Balochistan and the Islamabad Capital Territory (ICT). Thirteen percent of the total 39,497 FIRs registered across the country were of crimes involving physical harm to persons. Attempted murder, hurt and murder remained the most widespread crimes in June, with 1,350 cases of attempted murder, 838 of murder and 2,304 FIRs of hurt reported in 65, 63 and 61 districts respectively. While attempted murder remained the most widespread of all crimes, reported in 65 districts, it was second to 2,304 hurt FIRs with regard to frequency.

Lahore reported the highest number (380) of attempted murder FIRs while maximum murder FIRs in a single district, 63, were reported in Karachi. The ethnic and political strife in Karachi may be a pertinent reason behind increased cases of killings. The spread of violent crimes in the country warrants immediate attention of institutions responsible for curbing crimes and maintaining law and order. Region wise, 91% of the total FIRs against threat and fraud crimes was registered in Punjab, 5% in Sindh, 3% in KP and 1% in Balochistan.

No FIR was reportedly registered against any threat and fraud crime in ICT. Among crimes pertaining to threat and fraud, cheating, counterfeiting of currency-notes and criminal breach of trust remained the most widespread, reported in 35, 32 and 30 districts respectively.

Category wise, minor crimes had the highest, 59%, share in total FIRs registered in June 2011, followed by 18% pertaining to property related crimes, 13% of physical harm, 8% crimes of threat and fraud and 3% of crimes against women. The ten most frequently reported crimes constituted 35% of the overall crime caseload. These include theft, hurt, motor vehicle theft, counterfeiting currency notes, robbery and dacoity, attempted murder and murder respectively constituting 7%, 6%, 4%, 4%, 4%, 3% and 2% of all FIRs. Besides these, motor vehicle robbery and cheating stood for 2% each and criminal breach represented 1% of the total.