21% of Total 36,774 FIRs Pertained Of Crimes against Property 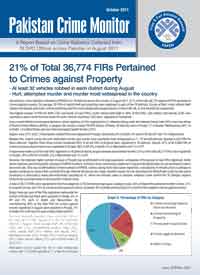 According to crime statistics collected by FAFEN from 76 districts across the country in August 2011, 21% of the total 36,774 registered FIRs pertained to crimes against property. On average, 32 FIRs of vehicle theft and snatching were registered in each of the 76 districts. Crimes of theft, motor vehicle theft, robbery and dacoity and motor vehicle snatching were the most widespread among property crimes in 60, 48, 47 and 44 districts respectively.

The highest number of FIRs for theft (723; one-fourth of such FIRs), motor vehicle theft (683 or 40% of the FIRs), and robbery and dacoity (376) were reported in Lahore while the most cases for motor vehicle-snatching (152) were registered in Faisalabad. Every month FAFEN’s Governance Monitors collect statistics of FIRs registered for 27 offences falling under the Pakistan Penal Code (PPC) from the offices of District Police Officers (DPOs).

In August, the monitors visited 76 DPO offices. Of these, 29 districts were in Punjab, 17 in Khyber Pakhtunkhwa (KP), 16 in Sindh, 13 in Balochistan and one in the Islamabad Capital Territory (ICT). Region-wise, 91% of all 7,724 property-related FIRs were registered in Punjab, followed by 4% in Sindh, 2% each in KP and ICT and 1% in Balochistan.

Besides this, violent crimes like hurt, attempted murder and murder were reportedly most widespread as 71, 70 and 69 districts reported 4,324 FIRs for these offences. Together these three crimes constituted 93% of all the FIRs of physical harm registered in 76 districts. Overall, 67% of all 4,639 FIRs of crimes involving physical harm were registered in Punjab, 20% in KP, 8% in Sindh, 4% in Balochistan and 1% in ICT.

A region-wise break-up of the total FIRs registered in 76 districts during August showed almost three-fourths (73%) of the total 36,774 FIRs were registered in Punjab, 19% in KP, 6% in Sindh, 2% in Balochistan and 1% in ICT. However, the relatively higher number of cases in Punjab may be attributed to its large population, willingness of the people to have FIRs registered, better police response and to the greater outreach of FAFEN monitors.

Similarly, fewer cases being registered in regions like Balochistan do not necessarily mean a low crime rate. This may be attributed to limited outreach of FAFEN, victims opting not to have cases registered, unavailability of infrastructure or perhaps to people’s tendency to resolve their conflicts through informal structures like Jirgas. Another reason for low reporting from Balochistan could be that police jurisdiction is restricted to areas administratively classified as ‘A’, which are normally cities or suburbs, whereas Levies control the ‘B’ category regions comprising rural tribal areas in various parts of the province.

A total of 36,774 FIRs were registered for the five categories in 76 districts during August. Category-wise, 55% of these FIRs pertained to other crimes, 21% to property crimes, and 13% to crimes involving physical harm, to people, 9% to threat and fraud and 3% of all the FIRs related to crimes against women. Ninety-three percent of the FIRs registered nationwide for crimes of threat and fraud were reported in Punjab, 3% in KP and 2% each in Sindh and Balochistan.

An overwhelming 83% of the total FIRs for crimes against women registered in August were reported in Punjab, 7% in Sindh, 6% in KP and 2% each in Balochistan and ICT. Ten most frequently reported crimes constituted 39% of the total 36,774 FIRs registered in the 76 monitored districts in August. These included theft (8% of the total FIRs), hurt (7%), counterfeiting currency notes (5%), motor vehicle theft (5%) robbery and dacoity (4%), attempted murder (3%), murder (2%), criminal trespass (2%), motor vehicle robbery (2%) and criminal breach of trust (1%).