3% of the Total 40,446 FIRs Pertained to Crimes against Women 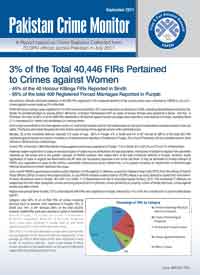 According to officially disclosed statistics of 40,446 FIRs registered in 70 monitored districts of the country which were collected by FAFEN in July 2011, crimes against women made up 3% of the total. Of the 40 honour killings cases registered in 15 of the monitored districts, 45% were reported in six districts in Sindh, including Tando Muhammad Khan (6), Ghotki (4) and Benazirabad (4) among others.

Moreover, in Khyber Pakhtunkhwa (KP) six cases of honour killings were registered in Buner and four in Peshawar. As many as 65% of all the 409 FIRs registered in 29 districts against forced marriages were reported in nine districts in Punjab, including Okara (77), Faisalabad (51), Vehari (36) and Multan (31) among others. Such a high concentration of crimes against women in rural/urban pockets calls for immediate action on the part of authorities to protect women’s lives and rights. The figures also dispel the generally held notions associating crimes against women with rural/tribal areas. Besides, 35 of the monitored districts reported 215 cases of rape – 85% in Punjab, 5% in Sindh and 4% in KP.

Relatively higher registration of cases of almost all types in Punjab may be attributed to its high population, willingness of people to register FIRs and better response by the police and to the greater outreach of FAFEN monitors who visited 40% of the total monitored districts in Punjab. Similarly, lesser registration of cases in regions like Balochistan and KP does not necessarily represent a low crime rate there. It may be attributed to limited outreach of FAFEN, non-registration of cases by the victims, unavailable infrastructure (police stations etc.) or to people’s tendency to resolve their conflicts through informal structures of conflict resolution like Jirgas.

Every month FAFEN’s governance monitors collect statistics of FIRs against 27 offences covered by Pakistan Penal Code (PPC) from the offices of District Police Officers (DPOs) in each of the project districts. In July FAFEN monitors visited a total of 70 DPO offices in as many districts to collect this information. Of these, 28 districts were in Punjab, 18 in KP, 12 in Sindh, 11 in Balochistan and one in Islamabad Capital Territory (ICT).

The monitored 27 offences are categorized into five major categories; crimes involving physical harm to persons, crimes pertaining to property, crimes of threat and fraud, crimes against women and other crimes. Region wise almost three-fourths (72%) of the total 40,446 FIRs were registered in Punjab, followed by 17% in KP, 9% in Sindh and 1% each in Balochistan and ICT.