6.5M Women in Punjab Not Registered as Voters

LAHORE: December 3, 2016: Political parties, civil society organizations and media have agreed to form a provincial committee for coordinated efforts to enhance the registration of women voters in Punjab ahead of General Election 2018.

The consensus was developed at a consultation organized by Free and Fair Election Network (FAFEN) here in collaboration with its member organization PATTAN. The committee will be mandated to take up the issue of registration of women for their Computerized National Identity Cards (CNIC) with the National Database and Registration Authority (NADRA) and their subsequent registration as voters with the Election Commission of Pakistan (ECP). 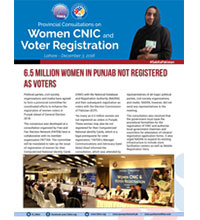 “As many as 6.5 million women are not registered as voters in Punjab. These women may also be not registered for their Computerized National identity Cards, which is a legal prerequisite for voter registration,” FAFEN’s Manager Communications and Advocacy Syed Abdul Ahad informed the consultation, which was attended by representatives of all major political parties, civil society organizations, and media. NADRA, however, did not send any representatives to the meeting.

The consultation also resolved that the government must ease the procedural formalities for the registration of CNIC and authorize local government chairmen and councilors for attestation of citizens’ registration application forms. It also urged NADRA to expand its existing infrastructure to include more facilitation centers as well as Mobile Registration Vans.

Chief Executive Officer TDEA-FAFEN Shahid Fiaz termed the gap between male and female voters as one of the major electoral or democratic issues. He called upon stakeholders to coordinate their efforts and form a committee to take up registration issues with the concerned authorities.

Ruling party MNA Shaista Pervez Malik told the consultation that getting CNICs for citizens is a cumbersome process and requires improvements. She said bureaucratic hurdles and lethargy on part of NADRA and other state institutions were the major causes for low women voter registration that need to be urgently addressed. She was of the view that ECP should pressurize NADRA to register as many citizens as possible before the upcoming general elections.

PTI’s MPA Saadia Sohail complained of the attitude of NADRA staff towards people who have to wait in long queues for hours in hostile weathers. She said CNIC is also a prerequisite for opening a bank account and registration of marriage, asking the government to improve the working of NADRA for enhanced registration of citizens.

Hussain Naqi, who represented the Human Rights Commission of Pakistan (HRCP), said that the existing NADRA infrastructure is inadequate to register 6.5 million women in Punjab. He proposed that ECP should issue Voter Cards to citizens as is done in India.

ECP Deputy Director Rai Sultan Bhatti acknowledged the gender gap in Mandi Bahauddin, Sheikhupura and Narowal, informing the consultation that Sahiwal has the lowest gender gap. He said the ECP has made a Gender Affairs Wing to lessen this deficit. He also emphasized the need for coordinated efforts of civil society, political parties, NADRA and media to minimize this gap. He said election stakeholders only become active near elections although the registration is open throughout the year.

He said there are procedural matters which have to be taken care of. He said census blocks are not GIS based and they are not fully digitized. If census and delimitation are done timely, this gap will definitely be minimized, he added.

Zahid Islam of Sangat Development Foundation said he was worried that rulers are helpless in front of state institutions. “Real problem is of governance. Administrative action is required, which is the only solution”, he maintained.