60% Increase in Cases of Gastrointesinal Infections 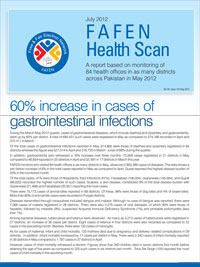 During the March-May 2012 quarter, cases of gastrointestinal diseases, which include diarrhea and dysentery and gastroenteritis, went up by 60% per district. A total of 690,431 such cases were registered in May as compared to 574,168 recorded in April and 372,411 in March. Of the total cases of gastrointestinal infections reported in May, 614,862 were those of diarrhea and dysentery registered in 84 districts whereas the figure was 527,514 in April and 318,720 in March – a rise of 68% during the quarter. In addition, gastroenteritis also witnessed a 16% increase over three months -75,569 cases registered in 21 districts in May compared to 46,654 reported in 20 districts in April and 52, 691 in 17 districts in March this year.

FAFEN monitors who visited 84 health offices in as many districts in May, observed 2,903,480 cases of diseases. The data shows a per district increase of 6% in the total cases reported in May as compared to April. Gujrat reported the highest disease burden of 20% in the monitored month. Of the total cases, 41% were those of Respiratory Tract Infections (RTIs). Faisalabad (106,004), Gujranwala (105,564), and Gujrat (66,620) recorded the highest number of such cases. Scabies, a skin disease, constituted 9% of the total disease burden with Gujranwala (21,488) and Faisalabad (20,651) reporting the most cases. There were 15,173 cases of animal bites reported in 68 districts. Of these, 96% were those of dog bites and 4% of snake bites. More than 80% of animal bite cases were recorded in Punjab districts.

Diseases transmitted through mosquitoes included dengue and malaria. Although no case of dengue was reported, there were 7,068 cases of malaria registered in 28 districts. There were also 5,275 cases of viral diseases, of which 90% were those of hepatitis, followed by measles (9%), suspected Acquired Immune Deficiency Syndrome (1%) and probable poliomyelitis (less than 1%). Among bacterial diseases, tuberculosis and tetanus were observed.

As many as 3,213 cases of tuberculosis were registered in 27 districts, an increase of 36 cases per district. Eight cases of tetanus in four districts were also recorded as compared to 22 cases in the preceding month. Besides, there were 132 cases of meningitis. As for cases of maternal, infant and child mortality, 120 mothers died due to pregnancy and delivery- related complications in 29 districts. In addition, infant mortality increased by 17 cases per district in May. There were 2,342 cases of infant mortality reported in 36 districts in May compared to 1,787 cases in 37 districts in April. However, cases of child mortality witnessed a decline. Figures show that 260 children died in seven districts this month before attaining the age of five years as compared to 325 such cases in six districts last month. Toba Tek Singh (105) reported the most cases of child mortality in the reporting month.