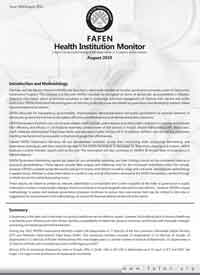 More than one fourth of dispensaries monitored nationwide lack proper infrastructure. Majority of them do not have basic facilities like latrines and clean drinking water supply. Around half of the dispensaries visited do not have female staff to deal with female patients. In addition, almost three fourth (76%) of dispensaries visited across the country do not have a ward and staff to deal with emergency patients. More than one fifth of patients interviewed complained that the doctor was absent on the day of FAFEN monitoring.