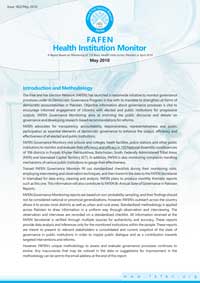 Lack of personnel and facilities to serve the primary health care needs of women is among the issues of greatest concern revealed by FAFEN’s inaugural Health Institution Statistics Monitor for April 2010. This study provides a baseline of data from which remedial action by government and elected representatives can be measured.

Most of the Basic Health Units (BHUs) monitored by FAFEN across Pakistan during April 2010 are employing more than the sanctioned number of paramedic staff (who are all male), but are short on nurses (who are predominantly female). A similar difference is documented in the appointment of male and female doctors, based on the information gathered from the BHUs monitored. While 2 percent of the sanctioned posts for male doctors are vacant, 13 percent of posts for female doctors have yet to be filled.

Around one-fifth of BHUs monitored across Pakistan do not have female staff to attend female patients, including two-thirds of BHUs in Balochistan. Almost one-fourth of monitored BHUs do not have personnel to offer family planning counseling or other services, almost 40 percent do not have a maternity kit, and almost half do not have a labor room. Geographic disparities are striking across the country, especially between Punjab (with the most personnel and facilities to serve women) and Balochistan (with the least). FAFEN Governance Monitors visited 110 Basic Health Units across Pakistan during April 2010 – 41 BHUs in 28 districts of Punjab, 28 BHUs in 22 districts of Khyber Pakhtunkhwa, 8 BHUs in as many districts of Balochistan, 30 BHUs in 20 districts of Sindh, 2 BHUs in as many Tribal Agencies, and 1 BHU in the ICT.