Crimes against Women Increase By 7% in a Year 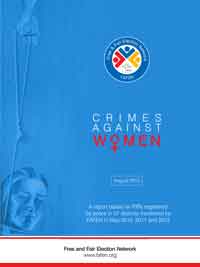 ISLAMABAD, August 30: Crimes against women increased 7% this year as 57 districts reported 982 cases in May 2012 compared to 922 in the same month last year.  However, over the last two years, an increase of 31% was reported in such crimes with 746 FIRs lodged in May 2010, says a Free and Fair Election Network (FAFEN) report.

Released Thursday, the report said it could not be ascertained if this increase was due to occurrence of more crimes or enhanced reportage in certain parts of the country, or both.

The report is based on data collected from District Police Offices (DPOs) in May 2010, 2011 and 2012 on FIRs registered for six categories of crimes against women in 57 districts.

The crime categories include honour killing, forced marriage, offences relating to marriage, rape, attack on modesty and insult of modesty through word, gesture or act.

Twenty one of the monitored districts were in Punjab, 16 in Sindh, 15 in Khyber Pakhtunkhwa (KP), four in Balochistan and one in Islamabad Capital Territory (ICT).

Punjab reported a 17% increase in FIRs for anti-women crimes between May 2011 and May 2012. Khyber Pakhtunkhawa (KP) had an increase of 15% but Sindh registered a 35% decline. In Islamabad Capital Territory (ICT), where nine cases were filed for crimes against women in 2011, the number of FIRs increased to 24 this year. Balochistan had three cases reported in May 2012 as compared to two recorded last year.

Among the monitored crimes, cases of honour killings and offences relating to marriage and the number of reporting districts increased.

In 2012, 31 cases of honour killings were reported in 15 districts as compared to 24 in 11 districts last year. Faisalabad with five cases was the highest reporting district in May this year. Similarly, as the number of reporting districts increased from nine to 11, FIRs filed for offences relating to marriage also went up – 131 this year compared to 112 in May 2011.

Although the districts reporting cases of attack on modesty this year remained the same (29), the number of FIRs filed increased by 36%. Except for Punjab, all other regions registered a decline in the number of reported cases. Lahore was the highest reporting district in 2011 and 2012 – the number of cases there increasing from 32 to 92.

The cases of word, gesture or act intended to insult the modesty of a woman increased from seven to 10 while the number of reporting districts remained the same – two each in 2011 and 2012.

The number of districts reporting rape decreased in 2012 as compared to the preceding year. It was still the most widespread crime. As many as 186 rape cases were reported in 31 districts this year as compared to 163 in 32 districts in 2011. Lahore had the highest of 40 cases in 2012 while Faisalabad (28) was the top reporting district in 2011.

On the other hand, the cases and number of districts reporting forced marriages came down over the year. Despite a decrease from previous year, the number of cases filed for forced marriages was the highest among all the reported anti-women crimes. As many as 341 cases were reported in 27 districts in May this year.

Among regions, cases of forced marriages decreased in Punjab and Sindh. However, a significant increase of 66% was registered in ICT where 24 cases were reported in May 2012 as compared to last year’s nine. KP and Balochistan also observed an increase.

Statistics show that Lahore (134) recorded the highest numbers of anti-women offences in 2012, followed by Faisalabad (110) and Multan (105).