Crimes against Women Increased by 18% in a Year 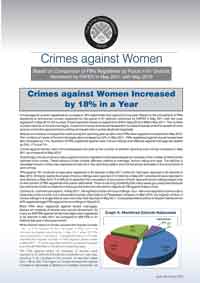 ISLAMABAD, August 5, 2011: Crimes against women, including forced marriages and sexual assaults, registered an increase of 18% over a period of one year, according to a comparison of cases registered in 61 districts across the country.

Based on the comparison of number of FIRs pertaining to anti-women crimes in 61 districts, the number of total reported crimes increased from 849 in May 2010 to 999 in May 2011, says a FAFEN report on crimes against women on Friday.

The number of cases on forced marriages, incidents of insults and sexual harassment increased significantly while the spread of more serious crimes like rape and honour killing increased but their number declined marginally.

Attacks on modesty increased the most during the reporting year as 58% more FIRs were registered compared to May 2010. Cases of forced marriages and sexual harassment went up by 42% and 17% respectively. However, FIRs registered against rape, honour killings and offences against marriage decreased by 25%, 17% and 1%, respectively.

Crimes against women were more widespread this year as the number of districts reporting them increased in May 2011 compared to May 2010.