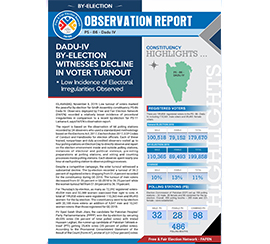 Despite a competitive campaign, the voter turnout witnessed a substantial decline. The by-election recorded a turnout of 36.2 percent of registered voters- dropping from 51.4 percent recorded for the constituency during GE-2018. The turnout of men voters decreased from 51.06 percent in GE-2018 to 36.25 percent while the women turnout fell from 51.84 percent to 36.19 percent.

Pir Syed Saleh Shah Jilani, the candidate for Pakistan Peoples’ Party Parliamentarians (PPPP) won the by-election by securing 40,595 votes (56 percent of total polled votes) with Imdad Hussain Leghari, the runner-up candidate of Pakistan Tehreek-e-Insaf (PTI) getting 25,406 votes (35 percent of polled votes). According to the Provisional Consolidated Statement of the Result of the Count (Form-47), a total of 3,013 (four percent) votes were excluded from the count.