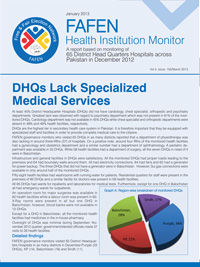 A report based on monitoring of 65 District Head Quarters Hospitals across Pakistan in December 2012.

The report released on Saturday said that the greatest lack was observed with regard to psychiatry department which was not present in 81% of the monitored DHQs. Cardiology department was not available in 45% DHQs while chest specialist and orthopedic departments were absent in 48% and 49% health facilities, respectively.

DHQs are the highest tier in secondary health care system in Pakistan. It is therefore important that they be equipped with specialized staff and facilities in order to provide complete medical care to the citizens.

Infrastructure and general facilities in DHQs were satisfactory. All the monitored DHQs had proper roads leading to the premises and 64 had boundary walls around them.All had electricity connections, 64 had fans and 62 had a generator for power backup. The three DHQs that did not have a generator were in Balochistan.  However, Sui gas connections were available in only around half of the monitored DHQs.

All 65 DHQs had wards for inpatients and laboratories for medical tests. Furthermore, except for one DHQ in Balochistan all had emergency wards for outpatients.