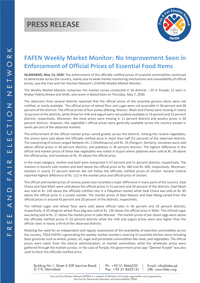 ISLAMABAD, May 13, 2020: The enforcement of the officially notified prices of essential commodities continued to deteriorate across the country, mainly due to weak market monitoring mechanisms and unavailability of official prices, says the Free and Fair Election Network’s (FAFEN) Weekly Market Monitor.

The Weekly Market Monitor comprises the market survey conducted in 56 districts – 25 in Punjab, 12 each in Khyber Pakhtunkhwa and Sindh, and seven in Balochistan on Thursday, May 7, 2020.

In the meat category, mutton and beef were overpriced in 57 percent and 51 percent districts, respectively. The markets in Karachi sold mutton and beef above the official price at Rs. 460 and Rs. 400, respectively. Moreover, markets in nearly 27 percent districts did not follow the officially notified prices of chicken. Karachi Central reported highest difference of Rs. 112 in the market price and official price of chicken.

The refined sugar and wheat flour were sold above official rates in 36 percent and 29 percent districts, respectively. A 20 kilogram wheat flour bag was sold at Rs. 130 above the official price in Malir. The refined sugar was being sold at Rs. 27 above the market price in Lakki Marwat. The market prices of per dozen eggs were above the officially notified prices in 23 percent districts while the milk and yogurt prices were also higher than the official rates in nearly a third of the observed districts.

Realizing the need for an independent and regular assessment of the availability of essential commodities across the country, TDEA-FAFEN is generating the weekly market monitors covering 15 essential kitchen items including basic groceries such as wheat, pulses, oil, sugar and perishable commodities like meat, and vegetables. The official prices were taken from the district administration, or market committees while the wholesale prices were gathered through the market surveys. In the case of Punjab, the government price app “Qeemat Punjab” was also used to fetch the officially notified price.