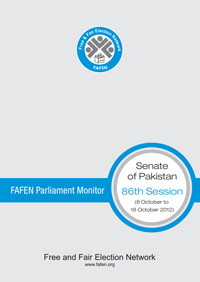 Low attendance of senators, lackluster debates on the issues of national significance such as the deteriorating law and order, devastation caused by floods in Balochistan and increase in the prices of petroleum products
marked the 86th session, which took up only 37% of the listed agenda items.

The house did not take up nine resolutions, six motions under rule 218, and 120 questions appearing on the agenda. However, the upper house passed the Drug Regulatory Authority of Pakistan which seeks to set up a
regulatory body to bring harmony in inter-provincial trade and commerce of drugs and therapeutic goods. Two other treasury-backed bills were introduced and sent to standing committees.

As observed in the previous sessions, the agenda for the private members’ days was set ambitiously making it impossible to take up all items during a single sitting. Around 55% (of the total 51 items) of the agenda was
contributed by private members, of which only two items were taken up and discussed on the floor of the house.

In comparison, only six government’s agenda items were left unaddressed. The session lasted 11 days from 8-18 October meeting for 22 hours and 52 minutes. Each sitting, on average, met for two hours and 32 minutes witnessing an average delay of 43 minutes.

Since the Senate Secretariat does not make public the senators attendance record, FAFEN observers conduct a headcount at the start and end of each sitting and documents the actual time spent on the floor by the Chairman, Deputy Chairman, Leader of the House and the Leader of the Opposition. Low attendance of senators continued during the session, as on average only eight senators were observed at the outset and 20 at the adjournment of each sitting. The quorum visibly lacking at various stages of the session was not pointed out by any of the legislators.