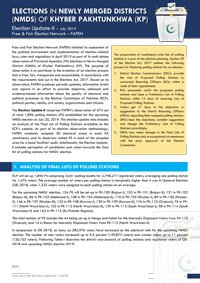 ISLAMABAD, July 17, 2019: Free and Fair Election Network (FAFEN) released its second update on the pre-election environment in the Newly-Merged Districts (NMDs) of Khyber Pakhtunkhwa on Wednesday. The Election Update-II comprises FAFEN’s observation of 674 out of total 1,896 polling stations (PS) established for the upcoming NMDs election on July 20, 2019. The election update also includes an analysis of the Final List of Polling Stations available on the ECP’s website. As part of its election observation methodology, FAFEN randomly sampled 50 electoral areas in each PA constituency and its observers visited polling stations in each of the sampled area for a basic facilities’ audit. Additionally, this election update includes perception of the candidates and voters towards the final list of polling stations for NMDs’ election.

FAFEN initiated its assessment of the political environment and implementation of election-related laws, rules and regulations in April 2019 as part of its multi-phase observation of Provincial Assembly (PA) elections in NMDs. The purpose of observation is to contribute to the evolution of an election process that is free, fair, transparent and accountable, in accordance with the requirements laid out in the Elections Act, 2017. Based on its observation, FAFEN produces periodic updates, information briefs and reports in an effort to provide objective, unbiased and evidence-based information about the quality of electoral and political processes to the Election Commission of Pakistan (ECP), political parties, media, civil society organizations and citizens.