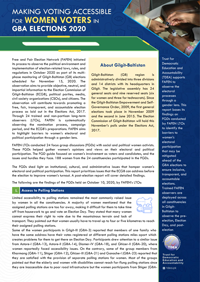 ISLAMABAD, October 29, 2020: The Free and Fair Election Network (FAFEN) has urged the Election Commission of Gilgit-Baltistan (ECGB) to take appropriate measures to further improve voters’ access to polling stations, particularly of women and seasonal migrants, for the Gilgit-Baltistan Assembly election scheduled for November 15, 2020.

A FAFEN statement Thursday said that such measures will complement the Commission’s efforts to enroll more women voters prior to election schedule and will result in improved participation of women in elections.

FAFEN’s statement is derived from the focus group discussions of FAFEN’s Long-Term Observers (LTOs) with 188 social and political women activists from across all 24 constituencies. These FGDs were part of FAFEN’s larger observation of political environment and implementation of election-related laws, rules, and regulations that initiated in October 2020. Through 24 trained and non-partisan LTOs, FAFEN is systematically observing the nomination process, campaign period, and the ECGB’s preparations. Moreover, using a gender-lens, it aims to highlight barriers to women’s electoral and political participation.

Accessibility to polling stations remained the most substantial issue raised by women in all the constituencies. A majority of the women pointed out that the assigned polling stations were at a significant distance, making it difficult for them to leave their regular housework to vote on Election Day.

FAFEN, therefore, is demanding of the ECGB to set up polling stations close to the assigned voters to reduce travel time. These polling stations may preferably be established within a range of one-kilometer, allowing greater participation.

Female social and political activists also highlighted women’s lack of awareness regarding their electoral rights and entitlements. In this regard, FAFEN recommends that ECGB initiate campaigns on television, radio, print, and social media in local languages to raise awareness among voters about their rights and entitlements and encourage them to vote. The ECGB could seek local civil society organizations’ support to manage these drives.

Women also face cultural barriers to their electoral participation. In some remote areas, they were not allowed to vote due to traditional agreements among communities. FAFEN suggested that ECGB run a mass media campaign to highlight the Election Act, 2017 provisions. The Act states that if the turnout of women voters were less than ten percent of the total votes polled in a constituency, the commission would declare polling at one or more polling stations or election in the whole constituency void.

Since many voters migrate from the high mountains to lower grounds to earn a living in winters, they may not cast their votes, registered at their home addresses. Therefore, FAFEN emphasized that ECGB takes immediate steps to facilitate these voters.  Moreover, ECGB should ensure easily accessible polling stations, considering remote and mountainous areas, where access to polling stations is even harder for communities. The commission must provide improved access to women and persons with disabilities, FAFEN said.

COVID-19 was also a cause of concern for the people. FAFEN suggests that the ECGB ensures coronavirus SOPs before and on Election Day to protect voters. The commission should establish these procedures building upon other countries’ learning that have conducted similar electoral exercises during the pandemic, FAFEN said.