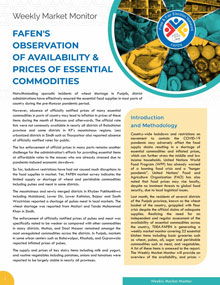 The provincial governments need to reinforce the existing market monitoring mechanisms at district level to ensure that citizens are not fleeced under the garb of lockdown especially during Ramzan. Nevertheless, district administrations have effectively ensured the essential food supplies in most parts of country during pre-Ramzan pandemic period. However, unavailability of official rate lists remains a major issue in several districts of Balochistan, Khyber Pakhtunkhwa (KP), and Sindh. The technological solutions for making official price lists available to public – such as ‘Darust Daam’ and ‘Qeemat Punjab’ apps – can help tackle this issue.

FAFEN’s market survey suggests that the disruptions in flour supply due to restrictions on inter-province movement of wheat affected the prices in wholesale market in various districts. In Punjab, the flour prices were as high as Rs. 830 in Gujranwala and Sialkot against the official price of Rs. 805 for a 20 kilogram bag. In Sindh, a 20 kilogram wheat bag was sold at Rs. 1,000 in wholesale markets of Kashmore, Jacobabad and Dadu against an official price of around Rs. 900. Similar was the situation in Khuzdar and Dera Bugti where a 20 kilogram flour bag was sold at Rs. 1,000. In Khyber Pakhutnkhwa, the highest flour price for a 20 kilogram bag was Rs. 975 in Lower Kohistan while the province had an official price around Rs. 800.

Official sugar prices oscillated between Rs. 70 and Rs. 83 in Punjab. FAFEN observer from Bahawalpur noted markets charging Rs. 10 above officially notified per kilogram price of sugar in the district, which is the highest difference between official and wholesale price in the province. Similarly, Sindh reported official sugar prices varying between Rs. 64 in Karachi and Rs. 70 in Kashmore. The highest difference between official and wholesale price was reported Rs. 9 from Tando Muhammad Khan. Observers from KP reported that sugar was sold at Rs. 85 in Abbottabad and Lower Dir while its official prices remained between Rs. 70 and Rs. 81 in the province. Balochistan markets also fared the same with highest wholesale price of Rs. 85 reported from Khuzdar and Kohlu.

The biggest difference between official and market prices of chicken in Punjab was Rs. 20, reported from Gujranwala. In the rest of the province, no major deviation from official rates was reported. Minimum poultry price remained Rs. 100 and maximum Rs. 146 per kilogram in the province. The market price of chicken was higher than official price in Balochistan’s district Dera Bugti as well. In Khyber Pakhtunkhwa, Lower Kohistan and Upper Dir sold chicken at Rs. 10 above the official per kilogram price. In Karachi, market price of chicken was reported to be Rs. 14 above the official price.

The enforcement of officially notified prices of routine vegetables varied across the country. FAFEN observers noted potatoes being sold at increased prices in Shikarpur, Dadu, Badin, Okara, Gujranwala, Lower Kohistan, and South Waziristan. The market prices of potatoes were Rs. 10 to Rs. 14 higher than the official prices in these districts. Similarly, the observers reported onion being sold at costly prices in Gujranwala, Sialkot, Hafizabad, Dera Bugti, Kohlu, Dadu, Shikarpur, D.I. Khan and South Waziristan. Their market prices were up from the official prices by Rs. 5 to Rs. 22 per kilogram. The highest difference in onion prices were reported from Gujranwala and Sialkot. Tomatoes’ official prices, however, were largely enforced with exception of some parts of KP including Lower Dir, Upper Dir, Mansehra and Charsadda. The prices of pulses and meat also remained unregulated at various places. Mutton and Daal Masoor were sold at much higher prices than the official prices across the country.

FAFEN’s Weekly Market Monitor is an initiative to complement the government’s efforts in lessening the economic burden of COVID-19 pandemic on citizens. Current Monitor comprises the survey of 15 essential commodities’ official and market prices in 48 districts – 21 in Punjab, 12 in KP, 11 in Sindh and four in Balochistan conducted on Thursday April 23, 2020. The detailed report accessible at FAFEN’s website ‘fafen.org’ provides more analysis on the enforcement of official prices and availability of essential commodities.