Faisalabad Registers Most FIRs for 11 of 27 Monitored Crimes 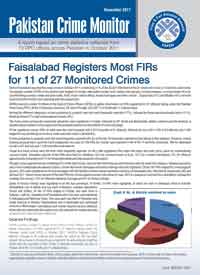 District Faisalabad reported the most crimes in October 2011 constituting 11% of the 32,021 FIRs filed for the 27 observed crimes in 73 districts nationwide. The highest number of FIRs in the district were lodged for murder, attempted murder, hurt, robbery and dacoity, criminal trespass, criminal breach of trust, counterfeiting currency notes and bank notes, theft, motor vehicle lifting, forced marriages and other crimes. Gujranwala (7%) and Multan (4%) were the second and third most crime reporting districts respectively. FAFEN monitors visited 73 offices of the District Police Officers (DPOs) to gather information on FIRs registered for 27 offences falling under the Pakistan Penal Code (PPC).

Of the 73 districts monitored, 25 were in Punjab, 20 in KP, 17 in Sindh and 11 in Balochistan. Among the different categories, crimes pertaining to property were the most frequently reported (17%), followed by those ensuing physical harm (11%), threat and fraud (7%) and crimes against women (4%). The most crimes among the monitored categories were registered in Punjab, followed by KP, Sindh and Balochistan.

Better outreach and the absence of parallel judicial systems in the regions are the probable reasons for this pattern of crime reportage. Of the registered crimes, FIRs for theft were the most frequent with 2,014 recorded in 61 districts, followed by hurt with 1,702 in 64 districts and 1,294 lodged for counterfeiting of currency-notes and bank-notes in 36 districts. Crimes pertaining to property were the most frequently reported with six of the top 10 frequently reported crimes falling in this category.

However, crimes ensuing physical harm were the most widespread. As many as 726 FIRs for murder were reported in 68 of the 73 districts monitored, 794 for attempted murder in 67 districts and 1,702 hurt FIRs in 64 districts. Threat and fraud crimes were the third most frequently reported. Of the 2,406 registered FIRs under this head, the most (54%) were for counterfeiting currency-notes. Seventeen percent of the FIRs were filed for cheating, 14% for criminal breach of trust, 12% for criminal intimidation, 2% for offences against public tranquility and 1% for fraudulent deeds and dispossession of property. Though crimes against women constituted 2% of the total crimes, some of the most heinous and inhumane acts fall under this category. Despite awareness and a more widespread educational system, crimes like forced marriages and honour killings were still registered.

Of the 781 FIRs lodged for crimes against women, 33% were registered for forced marriages with the highest numbers being recorded in districts of Faisalabad (42), followed by Gujranwala (40) and Sahiwal (37). Twenty seven percent of the total FIRs for crimes against women were those of rape, 24% for assault or criminal force intended to outrage the modesty of a woman, 12% for offences related to marriage and 4% for honour killings.

Cases of honour killings were registered in all the four provinces. In Sindh, 15 FIRs were registered, of which six were in Shikarpur, three in Kamber Shahdadkot, two in Ghotki and one each in Khairpur, Larkana, Naushahro Feroze and Sukkur. Of the 10 FIRs lodged in Punjab, two each were in Sahiwal, Lodhran, Sargodha and Faisalabad while one each was registered in Hafizabad and Rahimyar Khan. One case each was filed in Peshawar and Swabi districts of Khyber Pakhtunkhwa and in Nasirabad and Jaffarabad districts of Balochistan. Combating such crimes requires serious attention of the relevant authorities that need to not only educate the masses but also establish and implement laws effectively.