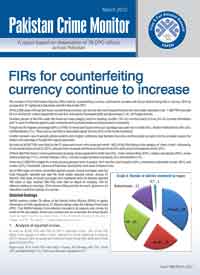 The number of First Information Reports (FIRs) filed for counterfeiting currency continued to increase with 44 per district being filed in January 2012 as compared to 37 registered in December and 28 in November 2011. Of the 2,906 cases of threat and fraud, counterfeiting currency was not only the most frequent but also the most widely reported crime – 1,902 FIRs recorded for it in 43 districts. Lahore topped the list with 644, followed by Faisalabad (260) and Gujranwala (174) – all Punjab districts. Fourteen percent of the FIRs under the threat and fraud category were for cheating, another 13% for criminal breach of trust, 6% for criminal intimidation and 1% each for offences against public tranquility and fraudulent deeds and dispossession of property.

Punjab had the highest percentage (89%) of FIRs for threat and fraud crimes but reportage was quite low in Sindh (6%), Khyber Pakhtunkhwa (KP) (5%) and Balochistan (1%). There was no case filed in Islamabad Capital Territory (ICT) in the month monitored. A better outreach, lack of parallel judicial systems and a higher confidence level between the police and the people are said to be the probable reasons for better crime reportage in Punjab than regions elsewhere.

As many as 36,567 FIRs were filed for the 27 observed crimes in the observed month – 58% of the FIRs falling in the category of ‘other crimes’, followed by crimes pertaining to property (23%), physical harm to people and threat and fraud crimes (8% each) and crimes against women (2%). Of the 8,405 FIRs filed for crimes pertaining to property, those registered for theft were 32%, motor vehicle lifting (23%), robbery and dacoity (20%), motor vehicle snatching (11%), criminal trespass (10%), criminal misappropriation of property (3%) and extortion (1%).

There were 2,999 FIRs lodged for crimes ensuing physical harm to people. Hurt was the most frequent (43%), followed by attempted murder (25%) and murder (22%). Faisalabad, Lahore and Peshawar reported the most cases of these crimes. Out of 855 cases of crimes committed against women, forced marriages were the most frequently reported and rape the most widely reported crimes. Across 31 districts, 338 cases of forced marriages were registered while 34 districts reported 185 cases of rape. Another 206 FIRs were filed for attack on modesty, 105 for offences relating to marriage, 19 for honour killing and two for word, gesture or act intended to insult the modesty of a woman.