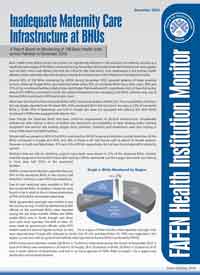 ISLAMABAD, January 2, 2011: Basic Health Units (BHUs) across the country are significantly deficient in the provision of maternity services as a significant percentage of the BHUs monitored during November 2010 lacked essential infrastructure and supplies such as labor rooms and delivery kits that are critical to safe child births. Such weaknesses in the primary health delivery system adversely affect the progress towards the achievement of the Millennium Development Goals.

Around 40% of 108 BHUs monitored by FAFEN during November 2010 reported absence of these essential services, says FAFEN’s monthly Health Institution Monitor released here Sunday.
FAFEN Governance Monitors visited 108 BHUs in 75 districts nationwide during the month of November, 2010. As many as 43 BHUs were monitored in 28 districts of Punjab, 28 in 18 districts of Sindh, 26 BHUs in 20 districts of KP, nine in seven districts of Balochistan, and two in as many agencies of FATA.
Although Punjab BHUs were relatively better where 95% of monitored BHUs had a labor room, 89% and 73% of the monitored facilities in Balochistan and Khyber Pakhtunkhwa (KP), respectively, did not have the facility.  About 43% of BHUs monitored in Sindh also lacked arrangements for managing child births. Likewise, only one of the two BHUs monitored in FATA had a labor room.
More than one fourth of the monitored BHUs (26%) nationwide lacked a delivery kit. The unavailability of delivery kits was largely reported from KP where 46% of the monitored BHUs did not have it. As many as 32% of monitored BHUs in Sindh, 25% in Balochistan and 12 % in Punjab also were not equipped with delivery kits. Both BHUs monitored in FATA had delivery kits.
Even though the observed BHUs met basic minimum requirements of physical infrastructure, considerable deficiencies were noticed in terms of facilities like washrooms and availability of clean drinking water. Essential equipment and services like working oxygen tents, sterilizers, stretchers and wheelchairs were also missing in many of the observed health facilities.
Female staff was present in 86% of the BHUs monitored by FAFEN Governance Monitors during November. All the BHUs monitored in Punjab and FATA, and 96% of those in KP had female staff to attend to female patients. However, in Sindh and Balochistan, 37% and 33% of BHUs, respectively, did not have the female staff to attend to women.
Sterilizers that are vital for sterilizing surgical instruments were absent in 21% of the observed BHUs. Another essential equipment monitored to have been lacking in BHUs nationwide was the oxygen tent which was missing in more than half (53%) of the monitored facilities.
FAFEN’s Governance Monitors reported that only 56% of the monitored BHUs in the country had stretchers. Similarly, a mere 29% had wheelchairs. Free of cost medicines were available in 96% of the monitored BHUs. In addition, medicines were found to be in stock in the in-house pharmacies of 95% of the BHUs monitored nationwide.
Weak government oversight was evident across the country as only 73 visits by elected and public officials to the monitored BHUs were reported during the last three months. MNAs and MPAs visited BHUs only in Sindh, though only there such visits were reported. The bulk of visits, 33, were made by government officials, while EDO Health made the second highest number of visits — 29. In a span of three months, most reported oversight visits were reported from Punjab (40), followed by Sindh (14), KP (12) and Balochistan (5). FATA was neglected in this regard, as only two visits by government officials were reported at the two BHUs monitored by FAFEN.