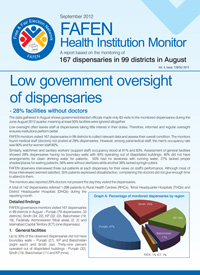 The monitors found medical staff (doctors) not posted at 28% dispensaries. However, among paramedical staff, the men’s occupancy rate was 90% and for women staff 80%.

Similarly, watchmen and sanitary workers’ (support staff) occupancy stood at 91% and 83%. Assessment of general facilities showed 29% dispensaries having no boundary walls with 40% operating out of dilapidated buildings; 46% did not have arrangements for clean drinking water for patients;  50% had no lavatories with running water; 27% lacked proper shades/places for waiting patients; 56% were without sterilizers while another 36% lacked syringe cutters.

FAFEN observers interviewed three out-patients at each dispensary for their views on staff’s performance. Although most of those interviewed seemed satisfied, 35% patients expressed dissatisfaction, complaining the doctors did not give enough time to attend to them.

The monitors also reported 29% doctors not present the day they visited the dispensaries.