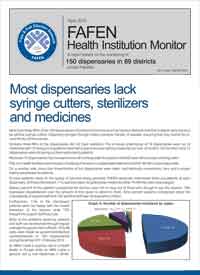 More than three-fifths of the 150 dispensaries monitored by the Free and Fair Election Network (FAFEN) in March were found to be without syringe cutters. Disposing syringes through cutters prevent transfer of disease, ensuring that they cannot be reused for any other purpose. Similarly, three-fifths of the dispensaries did not have sterilizers. The in-house pharmacies of 19 dispensaries were out of medicines with 12 having no supplies for less than a year and seven without medicines for over 12 months.

On the other hand 12 dispensaries were not giving out free medicines to patients. Moreover, 70 dispensaries had no washrooms with running water for patients while 62 were without clean drinking water. Fifty-one health facilities were housed in buildings that were in a dilapidated state and another 46 had no boundary walls. On a positive side, more than three-fourths of the dispensaries were clean, had electricity connections, fans and a proper waiting area/shade for patients.

To have patients’ views on the quality of services being provided, FAFEN observers interviewed three out-patients at each dispensary. Of those interviewed, 11% said they were not getting free medicines while 7% felt they were overcharged. Sixteen percent of the patients complained the doctors were not on duty but of those who did get to see the doctors, 16% expressed dissatisfaction over the amount of time given to attend to them.

Nine percent patients complained about the unavailability of support staff and 10% said this staff was not supportive of them. Furthermore, 11% of the interviewed patients were not happy with the overall behaviour of the doctors while 12% thought the support staff was rude. Most of the problems faced by patients and staff can be resolved through regular oversight by government officials. Only 68 visits were made by government/elected representatives to 150 dispensaries during December 2011-February 2012.

An MNA made a surprise visit to a health facility in Punjab while an MPA made a general visit to one dispensary in Sindh. Thirty-three visits were made by some other government officials to the monitored dispensaries while 32 were made by Executive District Officer (EDO/Health). Most of these visits were routine and monitoring visits whereas some were made for the purpose of checking the condition of dispensary, attendance of staff and availability of medicines.