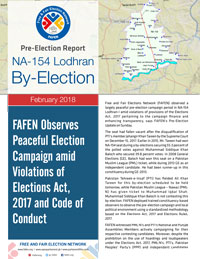 The seat had fallen vacant after the disqualification of PTI’s member Jahangir Khan Tareen by the Supreme Court on December 15, 2017. Earlier in 2015, Mr. Tareen had won NA-154 seat during a by-elections securing 55.3 percent of the polled votes against Muhammad Siddique Khan Baloch who secured 39.8 percent votes. In 2008 General Elections (GE), Baloch had won this seat on a Pakistan Muslim League (PML) ticket, while during 2013 GE as an independent candidate. He had been runner-up in this constituency during GE-2013.

Pakistan Tehreek-e-Insaf (PTI) has fielded Ali Khan Tareen for this by-election scheduled to be held tomorrow, while Pakistan Muslin League – Nawaz (PML-N) has given ticket to Muhammad Iqbal Shah. Muhammad Siddique Khan Baloch is not contesting this by-election. FAFEN deployed trained constituency-based observers to observe the pre-election campaign and local political environment using a standardized methodology based on the Elections Act, 2017 and Elections Rules, 2017.

FAFEN witnessed PML-N’s and PTI’s National and Punjab Assemblies Members actively campaigning for their respective contesting candidates. Moreover, despite the prohibition on the use of hoardings and loudspeakers under the Elections Act, 2017, PML-N’s, PTI’s, Pakistan Peoples’ Party’s (PPP) and independent candidates continued to use them for campaigning in the constituency. FAFEN observers also received reports of PML-N leaders promising jobs to voters in return of their assurance to vote for PML-N’s candidate. Recently, the government has also inaugurated the Speedo Bus Service between Lodhran and Bahawalpur. On the other hand, PTI’s leader Jahangir Khan Tareen arranged free medical camps for general public in NA-154.

The constituency witnessed a largely-peaceful campaign. Campaigns by the PTI’s, PML-N’s and Tehreek-e-Labaik Ya Rasool Allah’s (TLP) supported independent candidates overshadowed others. The PML-N and PTI held a series of corner meetings in various areas of the constituency. Use of oversized banners and religious appeals by contesting candidates remained a norm throughout the campaign period.

FAFEN also observed violation of Elections Act, 2017’s provision regarding “exclusive bank accounts for election expenses”. Moreover, the Election Commission of Pakistan (ECP) issued Code of Conduct for Contesting Candidates and Political Parties required each candidate to submit [to the District Returning Officer (DRO)] on every Thursday of the campaign period a statement of election expenses made during the preceding week. However, during the interviews with contesting candidates, a majority of them were either not aware of this provision or did not submit the expense statements.

FAFEN will deploy 50 trained observers including 19 women and 31 men to observe 338 polling stations on Election-Day. Using detailed standardized checklists, FAFEN observers will observe the voting, counting and consolidation of results processes. In addition to polling station observation, these observers will also collect Form 45 (Result of the Count) and Form 46 (Ballot Paper Account).

The Elections Act, 2017 prohibits the use of hoardings, panaflexes and loudspeakers during the election campaign. However, FAFEN observers reported the use of oversized banners and posters displayed by PTI’s, PML-N’s and TLP’s candidates.

PPPP’s candidate complained that his opponents had removed his banners put on display in some areas of the constituency. PTI’s Campaign Coordinator alleged PML-N workers of harassing PTI’s women workers in UC 336 during the election campaign. He said the police was not registering a First Information Report (FIR) despite an application by the victims. He also accused the District Administration of supporting PML-N’s candidate saying that the “police had been providing additional security to the Minister of State during the campaign period despite clear directions issued by the DRO against their action”.

According to Section 79(3) of the Elections Act, 2017, the District Election Commissioner (DEC) shall “provide candidate or his/her election agent a copy of the electoral rolls with photographs of the voters in print and electronic (temper-proof) formats”. The interviewed candidates revealed they were provided the electoral rolls without the photographs of the voters. Similarly, with the exception of PTI’s candidate, none of the contesting candidates complied with Section 133(1) of the Elections Act, 2017 regarding exclusive bank accounts for maintaining the election expenses. FAFEN observers also witnessed violation of Section 180(2) (b) requiring that “no person or political party shall print or publish any poster, handbill or pamphlet which does not bear on its face the names and addresses of the printer and the publisher”. However, it was observed that none of the election posters of contesting candidates comprised the names of printers or publishers.

FAFEN also received reports of candidates hiring private vehicles to provide the transport services to the voters on election-day, which is also prohibited under the ECP’s Code of Conduct for Contesting Candidates and Political Parties.

The final List of Polling Stations along with the Geographical Information System (GIS) mapping of their designated locations in NA-154 Lodhran-I have also been uploaded on ECP’s website. However, this is an incomplete list, and does not contain the GIS coordinates of at least 46 polling stations, which are included in the list published in the gazette. The GIS coordinates can be accessed at: (https://ecp.gov.pk/frmPSGE.aspx?ProvCode=11&ConstCode=154&ElectionType=NA).

According to Form-31 (Notice in Respect of Nominated Candidates), a total of 16 nomination papers were filed for 14 candidates. The RO declared 15 nominations as valid, while one of was rejected. As many as two candidates withdrew their nominations before the issuance of the final list of the candidates.

A total of seven candidates are contesting this by-election as Independents, while the remaining three are contesting on PTI’s, PML-N’s and PPP’s tickets. PML-N has awarded its ticket to Muhammad Iqbal Shah, while PTI to Ali Khan Tareen and PPP to Mirza Muhammad Ali Baig. TLP is supporting an independent candidate Malik Azhar Ahmad Sandila, whose application for the award of election symbol of TLP was declined by ECP on the grounds that the party had been issued a show-cause notice for not complying with the requirements of the Elections Act, 2017.

The constituents of NA-154 Lodhran-I had been electing the candidates belonging to various political parties since 2002. The winners of general elections 2002 and 2008 Nawab Aman Ullah and Muhamamd Siddiq Khan Baloch belonged to PML while the runner-up in both elections was Mirza Muhamamd Nasir Baig of PPP. Jahangir Khan Tareen entered the constituency politics during GE-2013, and was runner-up against Baloch who contested this election as an independent candidate but later joined PML-N. However, the results were reversed in a by-election 2015, which was held after Baloch’s disqualification by the Election Tribunal on the grounds of submitting fake educational degrees. Tareen served as a Member of National Assembly from this constituency for two years till December 15, 2017. He was recently disqualified by the Supreme Court from holding public office. Previously, he was elected to the National Assembly twice from NA-195 Rahim Yar Khan-IV during 2002 and 2008 General Elections.

The ECP has declared six polling stations as highly sensitive while 42 as sensitive. The authorities have also been directed to install security cameras inside these polling stations. Moreover, the ECP has sought help from the Pakistan Army to ensure the polling day security. The Army personnel will be stationed inside and outside polling stations on election-day. According to a notification issued by ECP, the army officials will exercise powers under Sections 4 and 5 of Anti-Terrorism Act, 1997 and will also have First Class Magisterial powers in case of personation of a voter, capturing of polling stations, illegal canvassing or illegal practices related to polling process. The Army personnel are deployed on each polling station from February 10, 2018 to February 13, 2018. The personnel will report any irregularity or malpractice to the Presiding Officer of the concerned polling station and if he/she fails to prevent the commission of reported irregularity, the security staff will bring the matter into the notice of the Pakistan Army officers deployed in the area.

FAFEN will deploy 50 trained observers including 19 women and 31 men to cover the entire constituency comprising of 338 polling stations. Using detailed standardized checklists, FAFEN observers will observe the voting, counting and consolidation of results processes. In addition to polling station observation, these observers will also collect Form 45 (Result of the Count) and Form 46 (Ballot Paper Account).

The observation of NA-154 Lodhran-I will be carried out by Farmers Development Organziation, a FAFEN partner organization with its secretariat in Multan, Punjab.