National Assembly’s Budget Session 2020-21: What You Need to Know 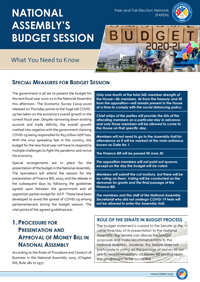 ISLAMABAD, June 12, 2020: The government is all set to present the budget for the next fiscal year 2020-21 in the National Assembly this afternoon. The Economic Survey (2019-2020) released on Thursday points to the huge toll COVID-19 has taken on the economy’s overall growth in the current fiscal year. Despite narrowing down existing account and trade deficits, the overall growth crashed into negative with the government claiming COVID-19 being responsible for Rs3 trillion GDP loss. With the virus spreading fast in the country, the budget for the new fiscal year will have to respond to multiple challenges to fight the pandemic and revive the economy.

Special arrangements are in place for the presentation of the budget in the National Assembly. The lawmakers will attend the session for the presentation of Finance Bill, 2020, and the debate in the subsequent days by following the guidelines agreed upon between the government and all opposition parties except for JUI-F. These have been developed to avoid the spread of COVID-19 among parliamentarians during the budget session. The vital points of the agreed guidelines are:

1. Procedure for Presentation and Approval of Money Bill in National Assembly

According to the Rules of Procedure and Conduct of Business in the National Assembly 2007, (Chapter XIX, Rule 182 to 197):

i. Three stages of discussions on the Money Bill

ii. General discussion on the budget as a whole

Cut motions are filed in written form two days before that particular item is to be taken up. Any member can move the cut motion to reduce the amount of demand. The Speaker has the final say on the admissibility of any cut motion. Amendments are not allowed in cut motions.

There are three types of cut motions:

iv. Voting on Demands for Grants

2. Dos and Don’t in the Budget Session