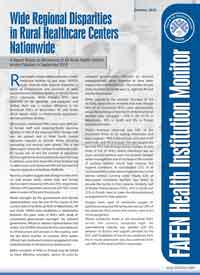 Rural Health Centers (RHCs) provide primary healthcare facilities to rural areas. FAFEN’s study observes wide regional disparities in terms of infrastructure and provision of basic equipment and necessary facilities in the monitored RHCs nationwide. While Punjab’s RHCs were observed to be generally well-equipped and staffed, there was a marked difference in the monitored RHCs of Balochistan, KP and Sindh, which lacked visibly in infrastructure, equipment, services and basic facilities.

Balochistan’s monitored RHCs were most deficient in female staff and maternity/family planning facilities. In half of the observed RHCs, female staff was not present and in three fourth human resources required to provide family planning counseling and services were absent. This is the same region where the number of sanctioned posts for nurses was nil and the number of appointed doctors against the sanctioned posts were 25% less. In addition, more than three fifth of the facilities had no labor rooms and nearly two fifth did not have the required apparatus to facilitate childbirth.

Reports compiled suggest that all regions were short on staff except Sindh, where male and female doctors were in excess by 16% and 25%, respectively. Likewise, 53% paramedic personnel and 50% nurses were in surplus of the sanctioned posts.

Weak oversight by the government and elected representatives may be one of the causes of the current state of facilities at RHCs in Balochistan, KP and Sindh. FAFEN data establishes a relationship between the poor state of RHCs with weak or nonexistent government oversight. No relevant government official or elected representative had visited the 10 RHCs found to be the most deficient in infrastructure and services in the country, over the last three months.

In contrast, RHCs where officials had conducted monitoring appeared to be relatively better in infrastructure and services. Better situation of RHCs in Punjab may be linked to more effective oversight, where 36 visits by relevant government officials or elected representatives were reported to have been made in the monitored RHCs. The number of such visits recorded for Sindh was 11, eight for KP and one for Balochistan.