Political Consensus on COVID-19 Response Fundamental at this Hour: FAFEN 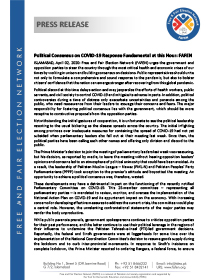 ISLAMABAD, April 02, 2020: Free and Fair Election Network (FAFEN) urges the government and opposition parties to steer the country through the most critical health and economic crises of our times by working in unison and building consensus on decisions. Public representatives should unite not only to formulate a comprehensive and sound response to the pandemic, but also to bolster citizens’ confidence that the nation can emerge stronger after recovering from this global pandemic.

Political discord at this time delays action and may jeopardize the efforts of health workers, public servants, and civil society to control COVID-19 and mitigate its adverse impacts. In addition, political controversies during a time of distress only exacerbate uncertainties and paranoia among the public, who need reassurance from their leaders to assuage their concerns and fears. The major responsibility for fostering political consensus lies with the government, which should be more receptive to constructive proposals from the opposition parties.

Notwithstanding the initial gestures of cooperation, it is unfortunate to see the political leadership resorting to the usual bickering as the disease spreads across the country. The initial infighting among provinces over inadequate measures for containing the spread of COVID-19 had not yet subsided when parliamentary leaders also fell out at their meeting last week. Since then, the political parties have been calling each other names and offering only division and discord to the public.

The Prime Minister’s decision to join the meeting of parliamentary leaders last week was reassuring, but his decision, as reported by media, to leave the meeting without hearing opposition leaders’ opinions and concerns led to an atmosphere of political animosity that could have been avoided. As a result, the leadership of Pakistan Muslim League – Nawaz (PML-N) and Pakistan Peoples’ Party Parliamentarians (PPPP) took exception to the premier’s attitude and boycotted the meeting. An opportunity to achieve a political consensus was, therefore, wasted.

These developments may have a detrimental impact on the functioning of the recently notified Parliamentary Committee on COVID-19. This 25-member committee – representing all parliamentary parties – is mandated to review, monitor, and oversee the implementation of the National Action Plan on COVID-19 and its appurtenant impact on the economy. With increasing concerns for developing effective measures to address the current crisis, the committee would play a central role. However, the unrelenting confrontational statements of the major parties may render the body unproductive.

While public paranoia prevails, government spokespersons continue to criticize opposition parties for their past performance, and the latter continue to use their political leverage in the regions of their influence to undermine the Pakistan Tehreek-e-Insaf (PTI)-led government decisions. Reportedly, the federal and Sindh governments were at loggerheads for some time over the implementation of the National Coordination Committee’s decision to resume goods supply during the lockdown and to curb inter-provincial movements. In response to Sindh’s insistence on complete lockdown, the Prime Minister resorted to ordering Rangers, a federal force, to ensure movement of goods transport in Sindh. Confusion persists about the actual policy status amid conflicting messages by federal and provincial governments.

The political parties appear to lack unanimity even within their own ranks. PTI’s strategy to control the spread of COVID-19 at the federal level differs from the approach adopted by the provinces that the party rules, even on the issue of lockdown. A recent news report quoted one of the Prime Minister’s special assistants as doubting the Punjab government’s testing statistics and criticizing the quarantine measures of the provincial government as “criminalizing the patients”. Similarly in Sindh, the PPPP Chairman reportedly warned his party’s provincial government for any potential shortfalls in its response to the pandemic, though the Sindh government has been the most proactive and assertive in enforcing measures to curb the disease. On the other hand, PML-N ruled Azad Jammu & Kashmir, and Gilgit-Baltistan lobbied the party’s central leadership to lash out at the federal government for not facilitating regions in their fight against the pandemic.

Such uncoordinated efforts and aggressive posturing of governments and political parties are fueling panic among the public, who are already distraught by the surging rate of infections and fatalities. This does not augur well for a national response to a crisis of unimaginable proportions.

The religious political parties offer a more positive and constructive response than their mainstream counterparts in these testing times. Jamaat-e-Islami (JI) suspended its anti-inflation protest drive to support the government in efforts to cope with the health and economic crisis. The party also offered the government use of its hospitals, dispensaries and medical staff to facilitate COVID-19 patients. Similarly, Jamiat Ulma-e-Islam (JUI-F) leaders have been avoiding any political criticism since COVID-19 emerged in the country. The JUI-F leader has advised his party’s volunteer corps to cooperate with the administration in curbing the spread of the pandemic and to distribute food rations, where needed.

FAFEN urges political leaders to employ existing constitutional forums – including the Parliament, provincial legislatures, and the Council of Common Interest – to harmonize federal and provincial efforts for pandemic control and relief. Teleconferencing options may be explored to convene the assemblies’ sessions, and district administrations may be instructed to facilitate legislators to attend the sessions by providing a room equipped with online or video-link facilities. Pakistan must have a unanimous and homogeneous response to the current situation. These exceptional circumstances warrant extraordinary efforts to prevent our country from falling further into poverty, unemployment, and economic disaster.