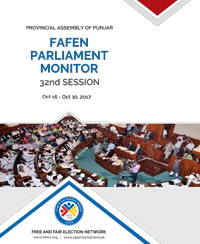 ISLAMABAD, November 2, 2017: The Punjab Assembly left 51% of its scheduled business unaddressed due to low attendance and treasury’s disinterest during 32nd session. The House took up 88 percent bills, 55 percent resolutions, thirty-three discussions and only six percent Adjournment Motions during the proceedings. Moreover, only 30 percent Starred Questions were discussed by the House.

The Adjournment Motions were not discussed due to unpreparedness of the treasury while the resolutions remained unaddressed due to the absence of the concerned lawmakers. The unaddressed bills and discussions were not taken up due to lack of quorum. As many as six out of 11 sittings were adjourned due to quorum deficiency.

According to FAFEN’s observation, the lawmakers’ attendance remained low throughout the session – with an average of 16 (4%) members present at the start and 42(11%) at the adjournment of each sitting. The Chief Minister did not attend any sitting while the Leader of the Opposition attended ten sittings for 10 hours and 27 minutes (52% of the proceedings).