Rise in the FIRs for Threat and Fraud 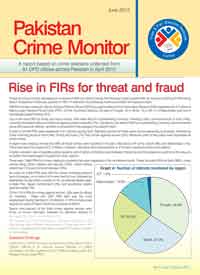 Threat and fraud crimes witnessed an increase of 28% per district during the February to April quarter with as many as 2,329 such FIRs being filed in 78 districts in February, another 2,778 in 77 districts in the following month and 3,029 in 81 districts in April. FAFEN monitors visited 81 offices of District Police Officers (DPOs) to gather data on First Information Reports (FIRs) registered for 27 offences falling under Pakistan Penal Code (PPC). Of the monitored districts, 28 were in Punjab, 22 in Sindh, 19 in KP, 11 in Balochistan and one in Islamabad Capital Territory (ICT).

Out of the total FIRs for threat and fraud crimes, 50% were filed for counterfeiting currency, cheating (19%), criminal breach of trust (18%), criminal intimidation (8%) and offences against public tranquility (7%). Except for per district FIRs for counterfeiting currency, which remained same (39 cases per district), all other criminal acts in this category, increased in April.

A total of 43,449 FIRs were registered in 81 districts during April. Eighteen percent of these were crimes pertaining to property, followed by those involving physical harm (9%), threat and fraud (7%) and crimes against women (2%). Moreover, 64% of the cases were bracketed as ‘other crimes’. A region-wise breakup shows that 69% of these crimes were reported in Punjab, followed by KP (21%), Sindh (9%) and Balochistan (1%).

There were also 210 cases in ICT. In March, however, 148 cases were reported their, a 41% rise in reported crimes in the district. A better outreach, lack of parallel judicial systems and a higher confidence level between the police and the people are said to be the reasons for better crime reportage in Punjab than other regions. There were 7,860 FIRs for crimes relating to property that were registered in the monitored month.

Rape with 24% FIRs filed was the most widespread, being reported in 43 districts. A 10% increase was reported in cases of rape in April as compared to March. Twenty nine percent of the total crimes against women were those of forced marriage, followed by offences relating to marriage (14%) and honour killings (3%). Ten districts out of the monitored 81 reported half (50%) of the total crimes. Nine of these districts were in Punjab and one in KP. Lahore, Faisalabad and Peshawar recorded the highest number of crime cases.