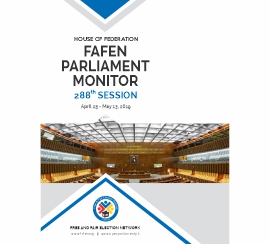 ISLAMABAD, May 15, 2019: The Senate addressed 93 percent of its agenda during 288th session with 67 percent lawmakers participating in the proceedings. The House passed five private members’ bills and a government bill during the session that continued between April 25 and May 13, 2019 while it also debated the recent increase in prices of petroleum products and annual report on human rights.

A total of 69 out of 103 (or 67 percent) lawmakers including 54 men and 15 women participated in the proceedings of the House by contributing to the agenda and/ or to debates. The participating male lawmakers included 13 members of PPPP, 12 of PML-N, seven of PTI, three each of JUI-F and NP, two of JI, one each of BNP, PkMAP, MQM and 11 independents.  Similarly, six female PPPP lawmakers, four of PML-N, three of PTI and one each of MQM and ANP participated in the proceedings.

The House observed punctuality during the session with nine out 12 sittings starting on their scheduled time. On an average, each sitting started only half a minute behind the scheduled time. The maximum delay of four minutes was witnessed during fifth sitting. The seventh sitting was the shortest one that continued for an hour and 42 minutes seven minutes, whereas the fourth sitting was the longest that continued for four hours and 46 minutes

The session’s proceedings were interrupted on nine occasions due to lawmakers’ walkouts or the lack of quorum. The opposition lawmakers staged six walkouts mainly against the ministerial absence from the House while the quorum was identified thrice during the session with two sittings being adjourned due to lack of quorum.