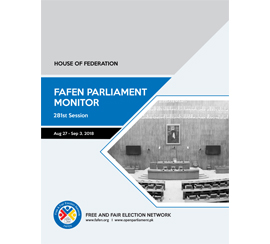 ISLAMABAD, September 5, 2018: The House of Federation did not address 40% of its scheduled business during 281st session. The House witnessed change in its leadership following the formation of PTI-led new government at the federal level. Senator Shibli Faraz of the ruling party was notified as the Leader of the House while Senator Raja Zafar-ul-Haq of PML-N became the Leader of the Opposition.

The House considered 35 (59%) of 59 agenda items appearing on Orders of the Day set for six-sitting session. Of the remaining agenda, 23 items were never taken up while one was dropped due to absence of the concerned lawmaker. Most of the left-over agenda belonged to private lawmakers set for consideration on private members’ day (Monday).

With an average of 15% senators present at the commencement and 20% at the adjournment of proceedings, each sitting lasted for three hours and seven minutes. The average maximum attendance per sitting remained 81 (78%) with two out of four minority senators present in every sitting, on average.

The sittings usually started on their scheduled time with an average one-minute delay. The Deputy Chairman presided over the entire proceedings during the session while six percent of the session duration was consumed in suspension due to lack of quorum or prayer-break.

The parliamentary leaders of MQM, ANP, NP, PkMAP, PPPP, and PML-F were present in every sitting while the leaders of PML-N and PTI attended five sittings each. Moreover, the JI leader attended four sittings followed by BNP-M (3) and JUI-F (one).

The House passed the National Disaster Management (Amendment) Bill, 2017 and referred four bills including an ordinance – the Elections (Amendment) Ordinance, 2018 – to the relevant standing committees.