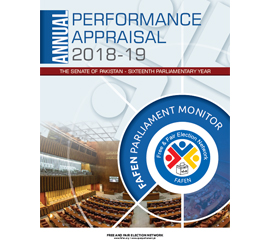 ISLAMABAD, March 15, 2019: With the post-election change in its leadership and membership, the Senate struggled during the 16th parliamentary year to maintain the higher standards of productivity and efficiency set during the previous term (2015-18), observers Free and Fair Election Network (FAFEN) in a report released on Friday. The Upper House of the Parliament faltered on maintaining the pace of producing legislations, overseeing executive, transacting committee business and maintaining order during the outgoing parliamentary year that concluded on March 11, 2019, if compared with the preceding year. However, the House improved on the counts of punctuality and respect for time.

Senate’s legislative productivity during its 16th parliamentary year remained half of what it was during the preceding year. The House passed only 26 legislative pieces – 20 government and six private – during the outgoing parliamentary year as compared to 50 legislations – 33 government and 17 private – passed during the previous year. This decline may partly be attributed to the numerical minority of the incumbent Pakistan Tehreek-e-Insaf (PTI) in the Senate.

The Senate also registered some decline on the counts of efficiency and institutionalization during the year. The House transacted more than three quarters (78 percent) of its agenda during the reporting year compared to 98 percent business transacted during previous year. The House took up 38 out of 49 private members’ bills, 40 out of 41 government bills, 31 out of 53 resolutions, 49 out of 62 Calling Attention Notices, 31 out of 42 Adjournment Motions, and 15 out of 42 Motions under Rule 218 coming on the orders of the day. Also, the House took up 92 out of 99 committee reports, 16 out of 19 statutory reports, and 45 motions under Rule 194 (1) for extending the committee reports’ deadlines. Around one quarter of business coming on the agenda remained unaddressed due to absence of the concerned lawmakers or due to adjournment of sittings without transacting the business in full.

The productivity of Senate’s Committees also showed a certain degree of decline during the reporting year as compared to previous year. A number of committees – standing, functional and special – submitted 92 reports to the plenary during 16th year against 228 reports presented last year.

The Senate’s oversight of executive and public representation also showed some numerical decrease during reporting year if compared with the previous year. The lawmakers adopted 30 resolutions, debated 14 motions under Rule 218, and asked 745 questions during 16th parliamentary year whereas they had adopted 69 resolutions, debated 73 motions and submitted 1,538 questions during previous year.

One reason behind the fall in numbers is the fact that the House met for lesser number of hours during the reporting year as compared to the previous one. Overall, the House held 76 sittings during the year- 29 fewer than previous year. On an average, each sitting in 16th year met 15 minutes less than an average sitting during 15th year.

The 16th year, however, registered a marked improvement in Senate’s punctuality. The House sittings began with an average delay of less than a minute. Last year, the sittings had recorded an average delay of six minutes. As many as 59 out of 76 sittings started on their scheduled time during 16th year while the maximum delay witnessed in the commencement of proceedings for a single sitting was 13 minutes.

On the attendance count, the official records do not suggest any remarkable difference between average attendance of lawmakers per sitting between two years. On an average, 64 lawmakers attended each Senate sittings during the reporting year. This number stood at 66 for the previous year. As many as 13 sittings had to be adjourned or suspended due to lack of quorum during 16th year whereas this number was only one during the previous year. The instances of disorderly conduct also registered a surge since the preceding year when six instances of protests were recorded whereas FAFEN observer noted 39 incidents of walkouts or protests during outgoing year.