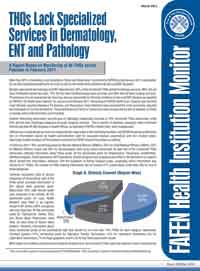 ISLAMABAD, April 8, 2011: More than 90% of secondary care hospitals at Tehsil and Taluka level, monitored by FAFEN during February 2011 nationwide, do not have specialized healthcare services to cater to the needs of the patients with skin and ENT diseases.

FAFEN’s Governance Monitors visited 46 THQs in 39 districts nationwide during February 2011. Twenty two (22) THQs were visited in 17 districts of Punjab, 13 in 12 districts in KP, nine in eight districts in Sindh and two in as many districts in Balochistan.

Besides specialized dermatology and ENT departments, 93% of the monitored THQs lacked Cardiology services, 89% did not have Orthopedic (bone) services, 72% did not have Ophthalmology (eye) services, and 39% did not have Surgical services. The absence of such specialized services may also be responsible for the high incidence of skin and ENT diseases as reported by FAFEN in its Health Scan Reports for January and February 2011. According to FAFEN Health Scan, scabies was the third most officially reported disease in 24 districts, and Respiratory Tract Infections have remained the most commonly reported set of diseases in monitored districts. These deficiencies at Tehsil or Taluka level also increase the burden of patients on DHQs or already overburdened tertiary care hospitals.

Another disturbing observation was the lack of Pathology (diagnostic) services in 74% monitored THQs nationwide, while 63% did not have Radiology (diagnosis through imaging) services.  This is worthy of attention, especially when combined with the fact that 45,485 diseases in Health Offices, as reported in FAFEN’s Health Scan, were undiagnosed.

While conditions of physical infrastructure like cleanliness, presence of electricity etc were well met in the monitored hospitals nationwide, 30 of the 46 monitored THQs did not have a Sui gas connection, and seven did not have telephone landline connections.

Oversight by the public and elected officials was observed to be poor. In November 2010 – January 2011 quarter, 47 visits by government officials and elected representatives were documented by the 46 monitored THQs in February 2011, of which 27 were made by EDO/Health and 10 by other Government Officials, including two by MNAs and six by MPAs. It is possible that lack of government attention and oversight by peoples’ representatives is in part responsible for the alarming lack of specialist departments like Dermatology, ENT and Pathology. Such departments should be established in THQs, according to approved standards so that the aforementioned widely reported diseases can be cured there.