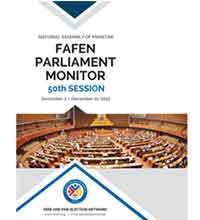 Islamabad, December 21, 2017: The National Assembly could not address its scheduled business during 50th session that ended on December 21, 2017. The eleven-sitting session had five government bills and heavy Private Members’ business on the agenda. Four government bills were passed while one was referred to the relevant committee. However, the House did not take up any agenda item except one Calling Attention Notice appearing on the Private Members’ day. The Question-Hour was also held only in three sittings during the entire session.

The lawmakers exploited the Points of Order to discuss various political and agricultural issues, which consumed nearly one-fourth of the proceedings (28%). The government failed to ensure the required number of strength in the House (25% of total membership- 342) to run the proceedings after opposition parties’ walkout over withdrawal of the Supreme Court and High Court (Extension of Jurisdiction to Federally Administered Tribal Areas) Bill, 2017 from the agenda despite consensus. Seven sittings had to be adjourned due to lack of quorum while the proceedings remained suspended in two sittings while the House was found in order on three occasions.

The Prime Minister and the parliamentary leaders of PTI, MQM, JUI-F and PML did not attend any of the sittings. On average, each sitting was attended by 171 (50%) lawmakers. According to FAFEN headcount, on average, 41 (12%) lawmakers were present at the outset and 58 (17%) at the adjournment of each sitting.

The National Assembly held 11 sittings during the session that began on December 7, 2017. Each sitting, on average, continued for nearly an hour and 51 minutes while the cumulative duration of 11 sittings was 20 hours and 20 minutes. The proceedings remained suspended for five hours and 29 minutes due to prayer break or lack of quorum.  None of the sittings could commence on its scheduled time. Each sitting, on average, started 13 minutes behind the schedule time.