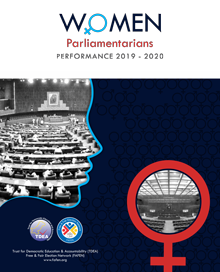 ISLAMABAD, March 7, 2020: Women parliamentarians continued to be proactive and assertive in their legislative, representative and oversight functions during the past year. Despite being only one-fifth of the current parliament, women sponsored more than one-third of the business, effectively raising citizens’ voices and public interest issues, reveals a report released by the Trust for Democratic Education and Accountability- Free and Fair Election Network (TDEA-FAFEN) on the eve of International Women’s Day.

Despite their substantial interest and active participation in parliamentary business, women parliamentarians faced challenges in having their voices heard. Nearly a third of women-sponsored parliamentary agenda were not taken up during the proceedings. Similarly, the Chair only allowed women 16 percent of the total parliamentary time allocated to debates.

Compared to their men counterparts, women parliamentarians sponsored almost double the number of parliamentary agenda, and also collaborated with them in sponsoring matters of public interest in parliament. Women along with men parliamentarians jointly sponsored half (51 percent) of the calling attention notices in the National Assembly. Thirteen percent amendments to the rules of procedure, nine percent private members’ bills, and seven percent resolutions were jointly coined by men and women in the Lower House. In the Senate, 20 percent motions for public importance debates, eight percent resolutions and two percent private members’ legislation was jointly sponsored by men and women.

Most of the agenda sponsored by women, however, was in their private capacities. Whereas, government agenda in parliament continues to be men-dominated due to low representation of women in the executive. Men members of the cabinet accounted for 89 percent of government business, while women ministers initiated only 11 percent of government-agenda items. Women’s contribution to government business in the National Assembly was slightly higher (12 percent) than their contribution in the Senate (eight percent), presumably due to higher number of women Members of National Assembly (MNAs) among parliamentary secretaries. Among 36 parliamentary secretaries, there are 13 women.

However, women Senators remained more active during the house debates in comparison to women MNAs. Each woman MNA took part in the debates for an average of 11 minutes, whereas each woman Senator averaged 26 minutes.

Women’s contribution to parliamentary business has varied over time. The contribution of women MNAs has dwindled from two-third to around one-third since 2009 when TDEA-FAFEN first launched its annual performance analysis. On the contrary, since 2015, women Senators’ contributions have surged from 18 to 25 percent.