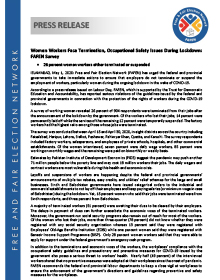 ISLAMABAD, May 1, 2020: Free and Fair Election Network (FAFEN) has urged the federal and provincial governments to take immediate actions to ensure that employers do not terminate or suspend the employment of workers, particularly women during the ongoing lockdown in the wake of COVID-19.

According to a press release issued on Labour Day, FAFEN, which is supported by the Trust for Democratic Education and Accountability, has reported serious violations of the guidelines issued by the federal and provincial governments in connection with the protection of the rights of workers during the COVID-19 lockdown.

A survey of working women revealed 26 percent of 904 respondents were terminated from their jobs after the announcement of the lockdown by the government. Of the workers who lost their jobs, 14 percent were permanently laid off while the services of the remaining 12 percent were temporarily suspended. The factory workers had the highest ratio among those whose jobs were terminated.

The survey was conducted between April 15 and April 30, 2020, in eight districts across the country including Faisalabad, Haripur, Lahore, Sialkot, Peshawar, Rahimyar Khan, Quetta, and Karachi. The survey respondents included factory workers, salespersons, and employees of private schools, hospitals, and other commercial establishments. Of the women interviewed, seven percent were daily wage workers, 85 percent were working on monthly wages and the remaining were paid on bimonthly or weekly basis.

Estimates by Pakistan Institute of Development Economics (PIDE) suggest the pandemic may push another 71 million people below the poverty line and may cost 18 million workers their jobs. The daily wagers and contract workers are most vulnerable during this health and economic crisis.

Layoffs and suspensions of workers are happening despite the federal and provincial governments’ announcements of multiple tax rebates, easy credits, and utilities’ relief schemes for the large and small businesses. Sindh and Balochistan governments have issued categorical orders to the industrial and commercial establishments to not lay off their employees and keep paying salaries (or minimum wage in case of Balochistan) during the lockdown. Yet, 15 percent women who said their jobs were terminated were from Sindh respondents, and three percent from Balochistan.

A majority of terminated workers (51 percent) were awaiting their dues to be cleared by their employers. The delays in payment of dues can further exacerbate the economic woes of the terminated workers. Moreover, the government-run social security programs also remain out of reach for most of the workers. Of the women who lost their jobs, more than three-quarter (78 percent) did not know whether they were registered with any social security organization whereas 13 percent said they were registered with Employees’ Old-Age Benefits Institution (EOBI) while one percent women said they were registered with Benazir Income Support Programme (BISP).  Only 28 percent women workers said that they were able to apply for support under the federal government’s emergency cash program.

In addition to the terminations and economic woes of the workers, the workplaces’ compliance with the occupational safety guidelines and precautionary and preventive measures for COVID-19 issued by the government also poses a serious threat to workers’ health.  Nearly half (49 percent) of the interviewed workers shared that no preventive measures were adopted at their workplaces since the onset of pandemic. FAFEN recommends the federal and provincial labour departments to keep a close vigil at workplaces to ensure the enforcement of the government’s directions and guidelines regarding preventive and safety measures for the workplaces.