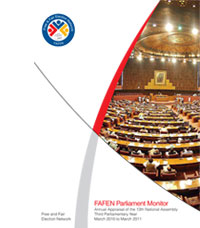 This annual report reviews the performance of 13th National Assembly in the third parliamentary year (March 2010 to March 2011). During this period, 10 regular sessions of the Lower House and two joint sessions of the Parliament were held. However, the report covers only the regular sessions. Marked by the passage of the historical 18th Amendment, the parliamentary year also witnessed improvement in terms of Members’ participation in the proceedings, lawmaking, and utilisation of session time. The Lower House held more sittings in the third parliamentary year than the second.