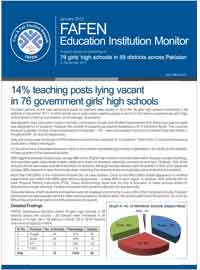 ISLAMABAD, Jan 31: A Free and Fair Election Network (FAFEN) report on Tuesday said fourteen percent of the total sanctioned posts for teachers were vacant in 76 of the 79 girls’ high schools monitored in 59 districts in December 2011.

In other words one in every seven teaching posts is vacant in the monitored state-run government girls’ high school where a teacher has to teach, on an average, 33 students, according to the report.

FAFEN Governance Monitors visited 29 schools in 20 districts in Punjab, 26 in 19 districts in Sindh, 23 in 19 Khyber Pakhtunkhwa (KP) districts and one in an agency in Federally Administered Tribal Areas (FATA).

Only one school was monitored in FATA where one teacher was available for 12 students. Three of the 13 sanctioned teaching posts were unfilled in the region.

On the other hand, the posted teachers in 80% of the schools maintained good levels of attendance (76-100%) as did students in three-quarters of the observed schools.

With regard to physical infrastructure, at least 90% of the 79 girls’ high schools monitored were well lit, housed in proper buildings, had boundary walls, black/white boards, tables and chairs for teachers, electricity connections and fans. However, 13% of the schools did not have desks and benches/chairs for students. Although sanitary workers were not present in 30% of the observed schools, 94% classrooms were found to be clean, indicating that cleaning duties were perhaps being shared by the students.

More than half (58%) of the monitored schools did not have libraries. Close to two-fifths (38%) lacked apparatus for science experiments and nearly half (49%) were without playgrounds – at least 40% in each region. In addition, 40% schools did not have Physical Training Instructors (PTIs). These shortcomings show that not only is education in these schools limited to theoretical curricular activities, it is also incomplete both academically and non-academically.

Daily attendance of both students and teachers was not displayed prominently in over a fifth of the monitored schools. Fourteen percent did not have arrangements for clean drinking water for students while 13% lacked staff rooms for teachers. As much as 96% of the schools had peons but 33% lacked security guards.