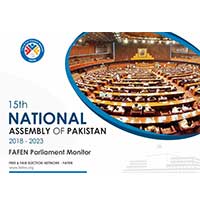 ISLAMABAD, August 16, 2018: Free and Fair Election Network (FAFEN) has released the Profile of 15th National Assembly (NA), which was sworn in on August 13, 2018. Currently, there are 330 members in the House. As many as nine seats have been vacated by the legislators who had won more than one seat in GE-2018. Moreover, two general seats are vacant due to postponement of the election while a woman-reserved seat of KP is also vacant. The incumbent Assembly has a representation of 12 political parties as compared to 18 parties represented in the previous Assembly. Additionally, there are four independent legislators in the House.

This report is based on information contained in Form B and Affidavits as annexed to the Nomination Papers submitted to the Election Commission of Pakistan by the candidates for General Election 2018.