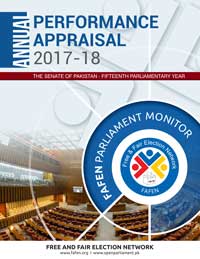 ISLAMABAD, March 11, 2018: During the fifteenth Parliamentary Year ending in March 11, 2018, the Senate set outstanding benchmarks of punctuality, efficiency and responsiveness, critically intervening in issues of national importance through quality debates and impactful legislation. Under the visionary leadership of the outgoing Chairman Raza Rabbani, the House of Federation contributed towards consolidation of democracy in Pakistan by allowing debates and discussions on matters as sensitive as balance of power among the organs of state, civil-military relationship and the role of intelligence agencies in an effort to assert the constitutional supremacy of parliament.

In an otherwise politically tumultuous year that witnessed an increasing judicial scrutiny of democratic and political processes, the Senate played a stabilizing role through its efforts to open intra-institutional dialogues and repeated assertions for the need of negotiations among powerful political actors and intuitions to develop unanimity of views on the directions that the state must take. The unprecedented briefing to the Senate Committee of the Whole by the Chief of Army Staff (COAS) was perhaps part of the same effort.

The Senate or the House of Federation also set efficiency standards for its sister legislatures by addressing an unprecedented 98% of its scheduled business and optimally using the proceedings for its core duties of legislation, executive oversight and public representation. In 15 sessions comprising 105 sittings, the House approved 50 bills, including two constitutional amendments that provided for extension of military courts for two more years and reallocation of the National Assembly seats among federating units on the basis of provisional census results. The Elections Act, 2017, which reformed and consolidated eight separate election laws, was also passed during the year.

The lawmakers kept a close vigil on the executive by raising 1,538 questions, 452 Matters of Public Importance, 112 Calling Attention Notices, 117 Adjournment Motions and as many Motions under Rule 218. Various standing, functional, select and special committees of the House also deliberated in length on issues referred to them, including the legislative proposals and presented 234 reports to the House. The House witnessed only two instances of quorum identification and six instances of walkouts or protests throughout the year.

The end of 15th Parliamentary Year also marks the completion of Senator Raza Rabbani’s term as the Chairman Senate. Under his leadership, the Senate enacted overarching regulatory reforms to improve its productivity and quality of work. The House introduced meaningful changes in its Rules of Procedure and Conduct of Business reforming the legislative procedure, mechanisms to hold government accountable to the elected representatives and devising new processes enabling citizens to connect to the parliament. The reforms in the Senate rules allowed the citizens to file public petitions to the House on issues of public importance and concerning the affairs of the federation. The Senate committees were also empowered to scrutinize the development budgets of their relevant ministries. In addition, the Senate got representation in the Public Accounts Committee that was previously consisted of the members of the National Assembly.

In another welcome change from the past practices, Chairman Rabbani ensured that the House sittings start on the scheduled time. The average delay in the commencement of proceedings reduced from 46 minutes per sitting to only four minutes per sitting. Unlike the past, the House did not take any recess-month during the past three years. Between 2012 and 2015, the Senate took four no-session months.