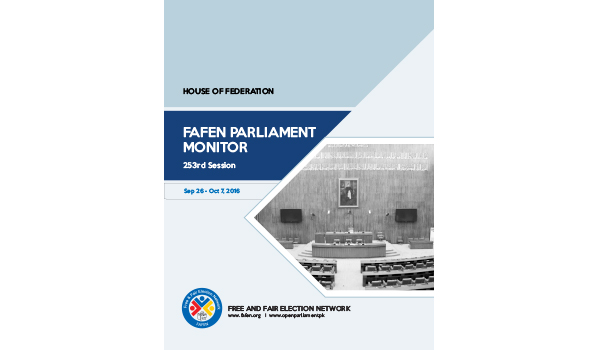 The Senate took up heavy agenda during eight sittings held between September 26, 2016 and October 7, 2016. It passed two bills, adopted seven resolutions, and witnessed introduction of 20 legislative proposals that were referred to the relevant committees.

With an average of 18% Senators present at the start and 22% at the end of each sitting, the session transacted most of the agenda, appearing on the Orders of the Day. A maximum of 69 (68%) members, on average, attended the session along with the presence of three minority Senators.

On average, each sitting started two minutes behind the schedule and lasted three hours and 11 minutes. The Prime Minister did not attend any of the sittings. An effective system of governance is the one where elected Head of the Government is engaged in the parliamentary interventions on a regular basis. Sub-rule (2A) of Rule 61 of the Rules of Procedure and Conduct of Business in the Senate states that the Chief Executive shall attend the Prime Minister’s Zero Hour (last hour of the sitting) at least once a week when the Senate is in session.

The House adopted seven resolutions during the session. Moved by Leader of the House, a supplementary resolution was adopted to condemn Indian atrocities in the Occupied Kashmir. The House adopted six more resolutions to condemn anti-Pakistan statements of Altaf Hussain; construct low-cost housing units; stop brain drain from the country; felicitate Pakistan Team for getting top position in Test Cricket rankings; give incentives to local car manufactures in order to boost up production of low priced vehicles and construct 250 km long highway along the coast from Sir Creek to Karachi.

Moreover, two resolutions were dropped due to the absence of relevant lawmakers, while one was deferred and the other was withdrawn by the mover.

The House witnessed presentation of 12 reports by chairpersons of various committees while one report presented by the Committee of the Whole was adopted. Following Motions under Rule 194 (1), the extension in time period was granted for submission of two reports while one motion was not taken up.

The Senate debated six out of 14 Motions under Rule 218 that dealt with the present state of relations between Pakistan and India; the procedure laid down by the Ministry of Housing and Works for acquiring land from private sector to develop its housing schemes; the plight of Pakistani labourers in Saudi Arabia; the situation arising out of transparency concerns on the loan of $ 408 million taken by the Government of Pakistan from Switzerland-based financial group; multiple problems being faced by agricultural sector in the country and the need to protect the rights of Tax Filers in the country.

Six motions under Rule 218 were not taken up while two more were deferred. The House approved the Motion of Thanks to the President of Pakistan for his address to both the Houses assembled together on June 1, 2016.

Under Rule 278, the House approved an amendment to the Rules of Procedure and Conduct of Business in Senate 2012. The amendment empowered the committees to hold public hearing for seeking input from citizens at large in relation to any matter under its consideration.

The House discussed a Motion under Rule 60 regarding the names of the persons / firms who obtained loans of Rs 5 million or above from the National Bank of Pakistan during the last five years.

Six Adjournment Motions appeared on the Orders of the Day of which four were not admitted by the Chair while one was dropped due to the absence of the mover and other was withdrawn.

The House took up seven CANs regarding non-regularization of 200 contractual employees of PCSWR for the last 10 years; failure of the Ministry of Commerce to increase exports by 35 billion; decision of the Government to roll back Pakistan Textile City project at Port Qasim Karachi; the emergence of new circular debt of Rs. 250 to 300 billion at present; the mismanagement in the affairs of EOBI, illegal sale of Government-owned residential quarters in Karachi and the non-establishment of Passport Offices in Districts Musakhel, Ziarat and Harnai despite recruitment of staff for these offices.

Two CANs were not taken up by the House regarding refusal of Ministries of Water and Power and Finance to extend the relief of Rs. 228 billion, recommended by NEPRA, to the electricity consumers and reduction of 50% in the funds of Federal Flood Commission. Another CAN by the Federal Government for the maintenance and strengthening of river embankment despite the fact that the warning of floods has been issued by the Pakistan Metrological Department.

Another CAN about non-completion of electrification schemes in three villages was dropped due to absence of mover.

Human rights issues were highlighted through various interventions during the session. A bill – the Trafficking in Persons Bill, 2016 – was introduced to ensure protection of the rights of women and children. Similarly, the Smuggling of Migrants Bill, 2016 was introduced to protect rights of Pakistani migrants and save them for being blackmailed by unscrupulous smugglers.

Other parliamentary interventions were used to condemn Indian brutalities and gross human  rights  violations in Occupied Kashmir by  Indian forces; urge the  international  community to immediately take notice of  the grave  human  rights  violations  in  the  occupied  Jammu  and  Kashmir; protect democratic rights of the people; discuss fundamental  and  constitutional  rights of people; the non-availability of legal aid to under-trail prisoners and the enforced disappearances and mutilated bodies being found in Balochistan.

A point of personal explanation was raised by a PkMAP lawmaker regarding a news item published in a section of the press about blackmailing of State Minister for Information Technology by Standing Committee on Less Developed Areas. The Chair asked the Leader of the House to look into the matter.

A total of 83 out of 130 (64%) Starred Questions were taken up on the floor of the House, while Senators raised another 176 Supplementary Questions. Of these, 17 were related to the Ministry of Interior and Narcotics Control; Ministry of Communication (14), Ministries of CADD and Finance (11 each) and Ministry of Commerce (10).

The lawmakers raised 31 Points of Public Importance that consumed 121 minutes of the session’s time.

Two PPPP lawmakers pointed out quorum separately in 2nd and 3rd sittings of the session that led to the adjournment of the sitting.

The entire opposition boycotted the proceedings during 3rd sitting against the provincial government’s move to stop Leader of the Opposition in the National Assembly from attending a rally in Lahore.