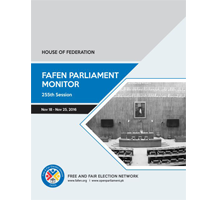 ISLAMABAD: The Senate took up heavy legislative agenda during six sittings held between November 18, 2016 and November 25, 2016, as it passed six bills, adopted eight resolutions, and witnessed introduction of eight legislative proposals that were referred to the relevant standing committees.

With an average of 18 Senators (17% of the total membership – 104) present at the start and 19 members (18%) at the end of each sitting, the 255th session transacted most of the agenda appearing on Orders of the Day. A maximum of 63 (62%) members, on average, attended the session along with the presence of two minority legislators.

On average, each sitting started one minute behind the schedule and lasted three hours and 20 minutes. The Prime Minister did not attend any of the sittings. An effective system of governance is the one where elected Head of the Government is engaged in the parliamentary interventions on a regular basis. Sub-rule (2A) of Rule 61 of the Rules of Procedure and Conduct of Business in the Senate states that the Chief Executive shall attend the Prime Minister’s Zero Hour (last hour of the sitting) at least once a week when the Senate is in session.

Out of 13 Adjournment Motions (AMs) appearing on Orders of the Day, nine were termed out of order for being in contravention with the rules, two were dropped due to absence of the mover, and one was withdrawn by the mover. The only debated AM was regarding terrorist attack on the shrine of Syed Sakhi Shah Bilawal Noorani situated in district Khuzdar, Balochistan, that resulted into the deaths of more than 60 people and injuries to more than 100 others. Eight lawmakers, including State Minister for Interior spoke on the subject for an hour and 18 minutes.

The Senate debated four out of seven Motions under Rule 218 that dealt with the importance of reviewing the Master Plan of Islamabad, recruitment policy of the government, and the government’s stance on delay in conducting census and rehabilitation of the internally displaced persons in FATA.

One motion on lowering water table in the country and the steps controlling the same was deferred while two other motions on law and order and non-hygienic conditions in the Federal Government Hospitals were dropped.

The House witnessed presentation of 13 reports of various committees while Annual Report for the year 2015-2016 of the Central Board of Directors of the State Bank of Pakistan on the State of the Economy along-with the Statistical Supplement was also presented. Following Motion under Rule 194 (1), the House granted extension in time period for submission of 18 reports while one motion was not taken up.

The House took up seven Calling Attention Notices (CANs) on the irregularities in issuance of consent letters to the retired employees of Constitutional Bodies for allotment of plots in Sectors F-14 and F-15 under categories I, III and V; patients tested positive for Hepatitis-C at PIMS during the last one year; the train accident at Landhi Railway Station; the news item about narcotics business around educational institutions in Islamabad; soaring circular debt of power sector as has been reported in the press; non-construction of Chashma-Zhob transmission line despite its approval as well as inclusion in PSDP and cancellation of visas of Turkish teachers and staff of Pak-Turk schools.

The House adopted the proposed amendments in rule 172 and insertion of new rule 226A in the Rules of Procedure and Conduct of Business in the Senate, 2012.

The House also adopted a report after its presentation in the House by Chairman Senate Standing Committee on Law and Justice. The report was on a matter referred by the House on November 10, 2015 regarding “implementation of Building Code, with particular reference to provisions regarding earthquake, for suggesting penal provisions, measures and mechanism regarding violation of said Code”.

A special report of Standing Committee on States and Frontier Regions was adopted which was related to schemes of Health and Education Departments in South Waziristan, deleted from Umbrella Schemes of FATA, ADP.

The House adopted eight resolutions during the session. Two separate resolutions were about expressing sorrow over the demise of former Leader of the House Jehangir Badar and Senator Haji Adeel. The House adopted six more resolutions to ensure women representation in the Council of Islamic Ideology, inclusion of Climate Change subject in the curriculum of Classes One to Matric in Islamabad schools, bring changes to National Accountability laws in a bid to discover movable and immovable Benami properties/companies, waive off agricultural loans outstanding against the farmers in Balochistan; condemn missile attack on the sacred city of Makkah and to thank Minister for Finance for his interest in raising the salary of parliamentarians.

Human rights issues were also highlighted through various interventions during the session. A bill – the Right to Information Bill, 2016 – was introduced to promote public right to information to enhance transparency and accountability.

The rights of transgender community particularly their protection, education and good upbringing were highlighted through a Point of Public Importance and the Chair referred the matter to Committee on Marginalized Sections of Society with directions to furnish report within two months.

Ruling of the Chair was sought on the incident of alleged torture of a student and the suicide of two students at the same institution in Larkana was highlighted through Point of Public Importance. The Chair asked PPPP Parliamentary Leader Senator Taj Haider to take up the matter with Chief Minister Sindh while he will also talk to him on the issue.

Advisor to Prime Minister on Foreign Affairs gave policy statement on implementation of recommendations of the Committee of the Whole’s meeting. The House was informed that OIC Independent Human Rights Commission has asked India to give them access to  the  Indian Occupied  Kashmir  to  observe  human  rights situation over there.

The lawmakers raised 32 Points of Public Importance that consumed 76 minutes of the session’s time. A total of 76 out of 165 (46%) Starred Questions were taken up on the floor of the House, while Senators raised another 126 Supplementary Questions.

A privilege motion of PML-N female lawmaker regarding the violation of the directions of the Committee by SECP was referred to the relevant committee. In the last sitting, PTI and few opposition lawmakers walked out of the House for seven minutes over unsatisfactory reply of State Minister for Interior on CAN regarding cancellation of visas of Turkish teachers and staff of Pak-Turk schools.

The Code of Civil Procedure (Amendment) Bill, 2016 states that in in case of public nuisances and public charities, the Advocate General or two or more persons with the leave of the Court, may institute a suit for declaration and injunction or for such other relief as may be appropriate to the circumstances of the case.

The  Law  and  Justice  Commission  of  Pakistan  has  recommended  amendment in  the  said  sections  for  institution  of  suit  relating  to  public  nuisances  and  public charities direct with the leave of court without permission of the Advocate General. The proposed legislation will result in expeditious disposal of cases.

Shaheed Zulfiqar Ali Bhutto Medical University Islamabad (Amendment) Bill, 2016 says that, the PIMS,  a  tertiary  level  hospital  was  upgraded  to  become  a  University  which  is  an anomaly and resentment is found in 3000  strong  work  force  of  PIMS  and  public  at  large.  They  are  of  the  view  that their  status  as  a  civil  servant  will  be  endangered  which  is  detrimental  to  their interest. The up-gradation of PIMS to the status of the university will make PIMS as an autonomous corporate body that will have serious repercussions for the general public.  This  hospital  /  university  shall  not  be  able  to  provide  the  general  public health care services at such cheap costs.

Many sections/ sub-sections/clauses of the Act are conflicting to the Higher Education Commission / federal university ordinance which is the guiding force behind the establishment of any new university.  This  Bill, therefore, seeks to remove the above stated anomalies in order to bring this Act at par  with  the  HEC  Federal  Universities  Ordinance,  2002  and  other  public  sector medical universities.

The Right to Information Bill, 2016 aims to provide for the right to information in a rapid and low –cost manner, subject only to reasonable restrictions established by law.

The bill aims to further the objectives of Article l9-A of the Constitution and to promote public right to information to enhance transparency and hence accountability.

The Islamabad Prohibition of Expressing Matters on Walls Bill, 2016 prohibits the expression of matters on walls in the Federal Capital. Presently no law deals in Islamabad has affixed any penalty for wall chalking or writing different expressions on walls. The writings on the walls  tarnishes  the  urban  scenery  and  beauty  of  the  city.  This  Bill  strives  to proscribe  and  discourage  people  from  putting  expressions  on  the  walls  of  the city.

The Hindu Marriage Bill, 2016 gives a legal framework to the marriages in minority community and paving the way for the adoption of a comprehensive and widely-acceptable family law for Hindus living in Pakistan.