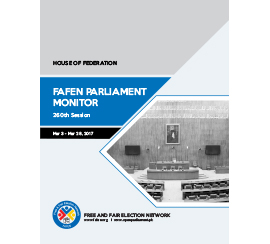 ISLAMABAD: The 14-sitting longest-ever session since 2013 took up heavy agenda, as it passed eight bills, including Constitutional amendment to revive military courts, adopted nine resolutions, and witnessed introduction of 14 legislative proposals during March 3, 2017 and March 28, 2017, reveals 260th session report of the House of Federation.

With an average of 22% Senators present at the start and 19% at the end of each sitting, the session transacted most of the agenda, appearing on the Orders of the Day. A maximum of 62% members, on average, attended the session along with the presence of three minority lawmakers.

Each sitting, on average, started seven minutes behind the schedule and continued for two hours and 48 minutes. The Prime Minister attended the 13th sitting on March 22, 2017 after a gap of almost two years. It was his fifth appearance in the Senate. Earlier, the Premier attended the sitting on June 3, 2014, December 31, 2014, January 6, 2015 and April 16, 2015.

The House witnessed three instances of walkout by the opposition lawmakers for 12 minutes in as many sittings over unsatisfactory reply to CANs by the relevant ministers.

Among these, 25 questions were related to the Capital Administration and Development Division, followed by Interior and Narcotics Control  & Finance (21 each); Aviation Division (16); Communication (14); Petroleum and Natural Resources & Industries & Production (13 each); National Health Services, Regulations and Coordination (12) and  Federal Education and Professional Training and Housing & Works (11 each).

The lawmakers raised 103 Points of Public Importance consuming five hours and 22 minutes of the session’s time. The House witnessed presentation of 22 reports of various committees while 22 motions were passed under Rule 194 (1) to extend the presentation period of as many reports regarding various parliamentary interventions.

Two reports were adopted under Rule 166 (4), one was of Standing Committee on Petroleum and Natural Resources while the other was on Finance, Revenue, Economic Affairs, Statistics and Privatization.

Among two bills, one bill was deferred and the other rejected, while 13 other bills were withdrawn.

The House adopted nine resolutions during the reporting period. These were related to the attacks on mosques in Quebec, Canada, and USA, registration of minors in domestic employment; conveying concerns of people to US Ambassador not to use the phrase “Islamic Terrorism”; acknowledging contributions of Pakistani women for development of country; denouncing the circulation of objectionable material about religious personalities on the social media; revival of Waseela-e-Haq and Waseela-e-Rozgar schemes; regulate affairs and fees of private hospitals and clinics in Islamabad and paying tribute to the Pakistan Navy on conducting the biggest International Naval Peace Exercise in Pakistan successfully in collaboration with 37 countries.

Four resolutions were dropped due to the absence of their movers, while three were deferred on the request of the mover and one was rejected by the House.

The House debated 10 motions under Rule 218. These were related to making Islamabad clean; dilapidated condition of roads in ICT; decline in exports of the country; eradicate the increasing number of quacks practicing in ICT; enforcing Islamic Banking System in the country; forced acquisition of land in Islamabad; status of Telephone Industry of Pakistan (TIP); increase in smuggling of electronics, textile products and other goods; role of the Pakistan Sports Board in the promotion of sports; implications of the statement made by Federal Minister for Interior in the Senate on January 10, 2017.

Three motions under Rule 218 were deferred on the request of their movers while two other motions were dropped due to the absence of relevant movers. A motion under Rule 60 regarding writing off of Rs. 4,600 million loans by the banks on their own discretion and without bringing the same into the notice of the government was also debated in the House.

The House passed a motion under Rule 204 to constitute Parliamentary Committee on National Security and adopted amendments in Rule 191 of the Rules of Procedure and Conduct of Business in the Senate. Two reports of Special Committee regarding the overall performance of PIA and demands presented in the House on March 8, 2017 and one of Finance Committee on a point of public importance about discrepancies in the forms issued by the Statistics Division for the population census were adopted after consideration.

The House witnessed ministerial response on eight matters raised by the Senators through various parliamentary interventions while Minister of State for Information Technology made a policy statement regarding the achievement of GSMA leadership award by the Ministry of Information Technology on behalf of government of Pakistan.

A total of 15 Adjournment Motions (AMs) appeared on the agenda of which three were admitted for discussion. The House took up 14 Calling Attention Notices (CANs) related to Ministries of Capital Administration and Development Division, Finance, Climate Change, Petroleum and Natural Resources, Interior and Narcotics Control, Overseas Pakistanis and Water and Power.  One CAN each was not taken up, deferred ad dropped.

Chairman of the Senate gave ruling on the use of Rule 99 and Rule 100 and announced the allocation of opposition benches to FATA lawmakers on their formal request.