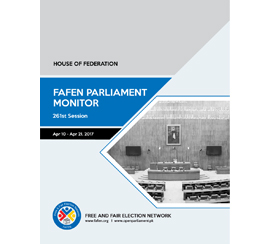 ISLAMABAD, April 26, 2017: The Upper House of Parliament witnessed slight decline in the attendance of lawmakers during 261st session as compared to the previous session. The ministerial absence and no-response from the relevant departments in responding to the queries of lawmakers caused the unusual adjournment of sitting by Chairman Raza Rabbani.

The House took up most of the agenda appearing on Orders of the Day during 10-sitting 261st session held between April 10, 2017 and April 21, 2017. During the course of proceedings, the Senate passed four bills, adopted five resolutions and later the sitting was prorogued due to the protest of opposition lawmakers against the Prime Minister following apex court’s verdict in Panama Papers case.

The Senate Chairman had to adjourn 5th sittings sine die due to the unavailability of ministers to answer the queries of Senators. However, the session was convened again after the assurance given by the government that the relevant ministers would attend the sessions at all costs.

Later, Senate Chairman issued warning to the government over the absence of relevant ministers. He asked the relevant officials to serve notice on Defence Secretary, telling him to appear before the Senate Standing Committee on the Rules of Procedures and Privileges.

The House also debated two Adjournment Motions (AMs) regarding impact of price hike on the poor and implications of Arbitration Tribunal of the World Bank’s decision on the arbitration claims filed by Tethyan Copper Company against Pakistan.

On average, 16 (15% of the total membership – 104) lawmakers were present at the start and 21 (20%) at the end of each sitting.  A maximum of 62 members, on average, attended every sitting of the session, including one minority lawmaker.

Each sitting, on average, started three minutes late and continued for two hours and 53 minutes. The Prime Minister did not attend any of the sittings. Sub-rule (2A) of Rule 61 of the Rules of Procedure and Conduct of Business in the Senate states that the Chief Executive shall attend the Prime Minister’s Zero Hour (last hour of the sitting) at least once a week when the Senate is in session.

The House passed four bills during the session as the two Private Member’s bills sought amendments (amendments of sections 323, 273, 274, 275) in Pakistan Penal Code. Amendment of section 323 in Pakistan Penal Code, 1860 is regarding increase in amount of Diyat while amendments in sections 273, 274 and 275 seek increase in imprisonment period and fine to those who are involved in selling noxious food and adulteration of drug business.

A government bill – the National School of Public Policy (Amendment) Bill, 2017 – seeks to revitalize and reorganize the National School of Public Policy (NSPP) for good governance to improve its image, efficient delivery and capacity to face challenges of ever-changing socio-economic milieu by removing some lacunas or inconsistencies in the administrative process and to improve and integrate Federal Government’s training infrastructure.

Another passed government bill – the Limited Liability Partnership Bill, 2017 – provides a new form of business structure which would fill the gap between business firms such as sole proprietorship/partnerships, the liability of whose partners is unlimited, and the companies governed under the Companies Ordinance 1984, whose members enjoy the benefits of limited liability.

Five resolutions were adopted by the House during the session. Two resolutions were dropped due to the absence of movers, while as many resolutions were deferred on the request of their sponsors and another one was withdrawn by the mover. The resolutions adopted by the House urged the government to promote wind energy; appoint a minister for Ministry of Textile Industry; implement the provision of clause (3) of Article 172 of the Constitution; promote celebration of traditional religious festivals in educational institutions and take steps to control indecent content on media.  The clause (3) of Article 172 says that mineral oil and natural gas within the Province or the territorial water adjacent thereto shall vest jointly and equally in that Province and the Federal Government.

The agenda of the Senate included 15 Calling Attention Notices (CANs), while 10 among them were taken up during the proceedings and the relevant ministers made statements on them. Four of the remaining CANs remained unaddressed while one CAN was dropped due to the absence of mover. The taken up CANs were regarding permission granted by the Government to former Army Chief for leading Islamic Military Alliance; mechanism introduced for housing scheme of government employees; attack on mines in Mohmand Agency; refusal of Pakistani banks to accept old designed US$ 100 notes;decline in remittances due to deportation of labourers from the Gulf countries; ranking of Pakistani passport as second last in Global Indexing Arton Capital Passport Index; increasing trade deficit during July-March (FY 2016-17); maltreatment of PIA female passenger at Benazir International Airport Islamabad; Indian atrocities in the Indian occupied Kashmir and high electricity tariff for new power projects.

The House discussed two Adjournment Motions (AMs), one was admitted for discussion, while three others were dropped due to the absence of movers. The House termed three resolutions out of order for being in contravention with the rules while four other AMs were withdrawn.

Discussion on an Adjournment Motion regarding price hike in basic food items consumed an hour and 37 minutes of the proceedings. Ten Senators took part in the discussion, which was concluded by the Minister for Commerce. The second Adjournment Motion was regarding implications of the decision of an Arbitration Tribunal of the World Bank’s ICSID on the arbitration claims filed by Tethyan Copper Company against Pakistan in relation to the denial of a mining lease for the Reko Diq project. The discussion continued for 27 minutes and was concluded by the Minister for Petroleum and Natural Resources. The government committed on the floor of the House to hold an in-camera briefing on this subject on May 8, 2017.

The House also held discussions on four Motions under Rule 218 concerning performance of the National Highway Authority; measures to boost industrial growth; report of the United Nations Development Programme on the water scarcity issue in Pakistan and the present status of implementation of Sustainable Development Goal No. 3 to ensure universal access to quality treatment at affordable rates. Three motions were dropped due to the absence of members while three others were deferred.

The ministerial response on various issues raised through Matters of Public Importance was also witnessed during the session as State Minister for Information Technology & Telecommunication made a statement on suspension of mobile phone services in Bajore and Mohmand Agencies as well as suspension of internet services in District Qallat, Balochistan; Advisor to Prime Minister on Foreign Affairs spoke on discriminatory treatment meted out to Pakistani citizens at Saudi Arabia airports and deportation of Pak-Turk schools staff from Pakistan. The Minister for Law & Justice informed the House about non-appointment of Sessions Judge in District Musakhel and Judicial Magistrate in Tehsil Darug despite sanctioning of these posts while State Minister for Interior took the House in confidence over the disappearance of PPPP workers. The State Minister for Petroleum talked about the violation of Article 158 of the Constitution regarding provision of less quantity of gas supply to Sindh and Balochistan provinces.

A total of 112 out of 251 (45%) Starred Questions were taken up on the floor of the House, while Senators raised another 181 Supplementary Questions. The reply of 35 questions (14%) was not received from the relevant departments that annoyed the Chairman who gave orders for serving notice on the Defence Secretary, asking him to appear before the Senate Standing Committee on Rules of Procedures and Privileges.

Lawmakers spoke on 66 Points of Public Importance, highlighting various regional and national issues that consumed three hours and six minutes (11%) of the session’s time. The Chair gave his observation nine times on various issues mostly related to interventions of the House. Mainly, he asked the ministers, bureaucrats and other functionaries to respond to the queries raised in the House and show interest towards the business of the House. The Chair also gave ruling on inconsistency in paragraph (c), sub-rule (1) of Rule 100 of the Rules of Procedure and Conduct of Business regarding referral of a bill reported by the Standing Committee to a Select Committee.

The issues of missing workers of PPPP and MQM, non-payment of salaries to paramedical staff of Poly Clinic Hospital, elections in PMDC and demolishing of a heritage building of school in Karachi were the topics discussed during the Zero Hour. Of 38 various reports appearing on the agenda, 24 were presented in the House, while one report was adopted and extension was granted to various committees for presentation of 13 other reports.

The House passed a motion under Rule 172A for constituting the House into a Committee of the Whole to develop strategy that addresses the increasing threat of water scarcity to the Federation.

The House witnessed five instances of walkouts – twice during the third and ninth sittings each and once during the fifth sitting – and one protest during the reporting session. The walkouts consumed 72 minutes of the proceedings. In the third sitting, PPPP and PML lawmakers walked out of the House against “enforced disappearances” of their party loyalists and blocking of CNICs of Pakhtun community, respectively.

The entire opposition staged a protest during the 10th sitting for 15 minutes demanding resignation of the Prime Minister in light of the Supreme Court’s verdict on Panama Papers case.