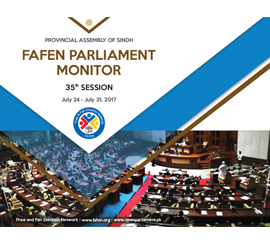 Through resolutions, the lawmakers demanded the Prime Minister Nawaz Sharif to resign from his office and congratulated the former President Asif Ali Zardari on his 62nd birthday. The House also adopted resolutions condemning the incident of rape in Multan and urging the Sindh government to computerize the police records and introduce e-complaint system in police stations. Moreover, four resolutions appearing on the List of Business were left unaddressed.

The lawmakers’ average attendance per sitting was 66 (40%) including six minority members. On an average, 31 (19%) members present at commencement and 52 (31%) at the adjournment of a sitting. Moreover, each sitting witnessed an average delay of 84 minutes and lasted two hours and 46 minutes. The longest (first) sitting of the session that continued for seven hours and one minute while the shortest (fifth) met for just two minutes. The cumulative duration of six sittings was 16 hours and 38 minutes.

The Speaker and the Deputy Speaker attended four and six sittings respectively. The Speaker presided over the proceedings for 10 hours and 18 minutes (62%) and the Deputy Speaker for six hours and 20 minutes (38%). The Leader of the House (Chief Minister) attended three sittings for nine hours and 20 minutes (56%) while the Leader of the Opposition attended two sittings for six hours and 14 minutes (37%). The Parliamentary Leaders of PPPP and MQM attended five sittings each followed by the leaders of PML-F and PTI who were present in four and two sittings respectively. The leaders of PML-N and NPP remained absent throughout the session.

The Question Hour was held in five sittings of the session. Out of 35 Starred Questions, the House took up 23 questions (66%) for on-floor answers by the relevant ministers. The lawmakers also asked 110 supplementary questions for further elucidation of ministers’ replies. The lawmakers also submitted 16 Call Attention Notices (CANs) to draw government’s attention to the issues of public importance. The House took up 11 of these CANs for ministerial statements. Nine CANs were related to the department of Local Government, two each to departments of Zakat & Usher, Revenue and Irrigation and one was related to the department of Health. The House did not address any of the five Private Motions submitted by the lawmakers to highlight governance issues.

The lawmakers staged a protest and a walkout during the session. The PML-N lawmakers protested for five minutes during first sitting over refusal by the Chair to allow a party lawmaker to speak during the proceedings. The entire opposition walked out from proceedings during third sitting against the passage of the Sindh Accountability Bill, 2017.

The Lawmakers spoke on 12 Points of Order (POs) during the session consuming 23 minutes of the proceedings. The government laid the annual performance report of the Sindh Revenue Board for the year 2015-16. Two PPPP lawmakers jointly moved a Question of Privilege (QoP) against the Director General National Accountability Bureau for his statement about accountability legislation in the Sindh. The House referred the QoP to the relevant standing committee for review.