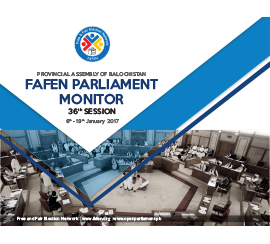 ISLAMABAD: The Provincial Assembly of Balochistan deferred 65 percent of the Starred Questions due to absence of their movers while it could not bring any legislative business on the agenda during the entire 36th session. The House also could not elect Deputy Speaker, whose office is lying vacant since December 2015, in violation of Rule 10 of the Rules of Procedure of the Assembly, observes Free and Fair Election Network (FAFEN) in its Session Report.

The Assembly praised the Chief Minister for assuring to provide job opportunities for youth on the posts lying vacant in various public departments, condemned Indian violations along the Line of Control and demanded implementation of job quota reserved for special persons, before being prorogued sine die after convening six sittings between January 6 and January 20, 2017.

The House passed 11 resolutions while the lawmakers tabled 12 resolutions either individually or jointly on various matters of public importance during the reporting period. The adopted resolutions were regarding condemnation of killings of Muslims in Myanmar and urging the Federal Government to highlight this issue at international fora; calling upon the government to ensure sale and purchase of mobile phones through their original invoices and CNICs’ photocopies; condemning atrocities of Indian Army in the Occupied Kashmir and violations on the Line of Control (LoC), demanding the government to take effective measures against gas load-shedding as well as low tariff rates for gas consumers of the province; calling for up-gradation of facilities at Zhob Airport; urging the Federal Government to fill the vacant posts and restoring the dismissed employees of the Utility Stores Corporation of Pakistan; calling for ban on Pakistan International Airlines (PIA) planes in dilapidated condition and decrease its fares; paying tribute to the Chief Minister and his cabinet for giving assurance on the floor of House regarding provision of employment opportunities to youth on around 26,000 vacant posts in various public departments within 90 days; asking for construction of an alternate airport in the province; urging the government to formalize a systematic plan to cope up with climate and weather changes and pressing the provincial government to ensure implementation of job quota reserved for disabled persons in the province.

The House referred an amendment to Assembly’s Rules of Procedure to relevant committee. The amendment was moved by a PkMAP lawmaker proposing for insertion of new rule for empowering the standing committees to constitute sub-committees.

On average, 16 (23%) members were present at the outset and 17 (25%) at the adjournment of sitting. Two-member representation of the marginalized groups was also in attendance during the session. Each sitting, on average started 40 minutes behind the schedule and lasted for two hours and 30 minutes. The entire session took 15 hours and two minutes to complete, while the sixth sitting was the longest that consumed four hours and 22 minutes. The first sitting, however, was the shortest that took an hour and 34 minutes of the proceedings’ time.

The Speaker attended five sittings and presided over the session for eight hours and 16 minutes (55%). The proceedings of the remaining seven hours (45%) were chaired by the Members of Panel of Chairpersons.

The House deferred Question Hour during four sittings due to the absence of movers. The only Question Hour was held during fourth sitting during which seven out of 10 Starred Questions were taken up and responded to by the relevant minister on the floor of the House. In addition, a lawmaker raised one Supplementary Question during the same sitting. From the total 20 Starred Questions appearing on the agenda during the session, the House managed to take up only seven questions that received oral as well as written replies from the departments concerned. The remaining 13 (65%) questions were deferred by the House due to the absence of their movers.

Two audit reports were laid in the House during the reporting session. The Annual Report of Balochistan Public Service Commission for the year 2015 was presented by NP lawmaker during first sitting while an Audit report of the Auditor General of Pakistan for year 2015-16 was laid by the Chief Minister during the third sitting.

A PkMAP male lawmaker moved an Adjournment Motion during first sitting to discuss the killing of a tribal leader in district Qila Abdullah. The House disposed of the motion and no further debate was held on the issue.

Lawmakers belonging to PkMAP submitted four Privilege Motions (PM) during the reporting period. The Presiding Officer while giving his ruling referred four motions to the concerned committees while one motion was disposed of.

The lawmakers belonging to JUI-F and ANP walked out of the House for seven minutes during sixth sitting against the Chair for not allowing the Leader of the Opposition to speak on a Privilege Motion. Quorum was pointed out twice during the reporting period. During fifth sitting, a lawmaker belonging to ANP pointed out quorum that led to early adjournment of the sitting, while quorum was pointed out second time during sixth sitting by a JUI-F lawmaker, but this time head count was done and the quorum was found to be complete.