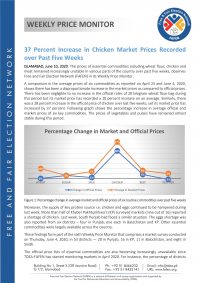 ISLAMABAD, June 10, 2020: The prices of essential commodities including wheat flour, chicken, and meat remained increasingly unstable in various parts of the country over past five weeks, observes Free and Fair Election Network (FAFEN) in its Weekly Price Monitor.

Moreover, the supply of key protein source i.e. chicken and eggs continued to be hampered during last week. More than half of Khyber Pakhtunkhwa’s (KP) surveyed markets (nine out of 16) reported a shortage of chicken. Last week, South Punjab had faced a similar situation. The egg shortage was also reported from six districts – four in Punjab, one each in Balochistan, and KP. Other essential commodities were largely available across the country.

These findings form part of the sixth Weekly Price Monitor that comprises a market survey conducted on Thursday, June 4, 2020, in 53 cities — 20 in Punjab, 16 in KP, 10 in Balochistan, and seven in Sindh.

The enforcement of official prices continues to paint a grim picture for the common citizens. Several commodities are being sold at a higher price than the officially notified prices. The four pulses were being sold at a higher price than the officially notified price in around two-thirds of the surveyed districts. The overpricing ranged between Rs. 35 and Rs. 180 for mong, Rs. 32 and Rs. 143 for mash, Rs. 35 and 104 for masoor, and Rs. 34 and Rs. 78 for chana. Karachi South remained the costliest city for pulse-shopping. Among the everyday vegetables, potatoes were overpriced in 53 percent districts, onions in 43 percent districts, and tomatoes in 36 percent districts. The overpricing in vegetables went as up as Rs. 35 in case of potatoes and onions and Rs. 60 in case of tomatoes. Killa Abdullah in Balochistan was most pricey district for vegetable shopping.

TDEA-FAFEN generates the weekly price monitor covering 15 essential kitchen items, including groceries such as wheat, pulses, oil, sugar, and perishable commodities like meat, and vegetables. It does this considering the need for an independent and regular assessment of the availability of such items. The observers obtained the official prices from the officials of district administrations, or market committees, and collected the wholesale prices through market surveys. In the case of Punjab, the government price app ‘Qeemat Punjab’ was also used to fetch the official rates.