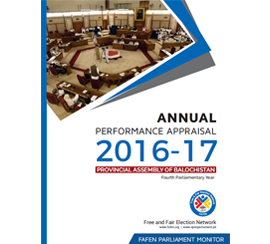 ISLAMABAD, May 28, 2017: The 10th Provincial Assembly of Balochistan witnessed improvement in the assembly performance in terms of working longer hours during fourth parliamentary year than the previous year, however, it could not excel in legislative productivity as it was reduced to less than half of what was achieved last year, says Free and Fair Election Network in its Annual Report on the performance of Balochistan Assembly.

The Assembly passed eight bills this year while it saw the passage of 19 legislative proposals during the preceding year. Other than longer working hours, no considerable improvement from last year was observed in most indicators of the conduct of the Assembly proceedings. Like previous years, the sittings started with long delays. In fact, the average delay in commencement of a sitting increased from 42 minutes during previous year to 44 minutes this year. Similarly, like previous years, half of the working days were actually off-days when no sitting was held. The average maximum attendance during a sitting was 32 this year as compared to 33 last year. The attendance of the Chief Minister (CM) declined as well. The incumbent CM has attended 47% sittings since his election in December 2015 whereas the previous CM’s attendance remained 74%. The incidence of quorum identification also increased from previous year’s four to six this year. The Speaker attended 88% sittings and presided over 72% proceedings whereas the office of the Deputy Speaker continued to be lying vacant since December 2015.

The province was hit with incidents of terrorism four times during last one year. These incidents claimed lives of around 230 people and injured more than 400. Moreover, the investigations into a mega corruption scandal involving the financial advisor of former Chief Minister Abdul Malik Baloch among others and successes of the military’s fight against insurgency in the form of several hundred insurgents surrendering their arms were important provincial events during the year.

The provincial legislators held discussions on law and order, governance crisis, power shortages, census issues, blocking of CNICs in certain areas of the province, however, no legislative action could be taken up on these issues. A major part of the provincial legislation was on the subjects devolved under the Eighteenth Constitutional Amendment. The approved legislation included eight bills relating to traffic regulations, security forces, low cost housing and welfare of the children, senior citizens and persons with special needs.  In addition, bills for prohibiting child marriages and setting up provincial commission on status of women and mass transit authority were forwarded to committees for review and deliberations. The Assembly also adopted 44 resolutions making recommendations to the government on issues related to governance, energy crisis, health, education, agriculture and political affairs.

The assembly amended its rules of procedure to make provisions for constituting Business Advisory Committee, empowering standing committees to appoint sub-committees and raising public importance issues through Call Attention Notices (CANs), Zero Hour and Points of Public Importance. This was first time in four years of the present Assembly that rules were amended.

The Assembly made CANs part of its rules on March, 2017 during 34th session. Since then, the lawmakers used this intervention six times to draw government’s attention to the absence of youth policy, regulation of conditions and salaries of public servants and release of funds for various government departments. The lawmakers also submitted seven Adjournment Motions in the Assembly seeking debates on security situation in the province. Moreover, they sought information on public importance issues from 13 ministries through 153 Starred Questions and raised five Questions of Privilege as well.