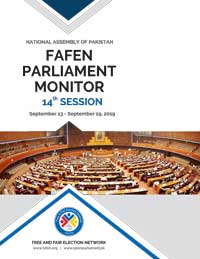 ISLAMABAD, September 25, 2019: The National Assembly addressed 32% percent of its scheduled business during its 14th session that continued between September 13, 2019 and September 19, 2019, observes Free and Fair Election Network in its session report.

Of 341 lawmakers, 108 (32 percent) including 83 men and 25 women contributed to the proceedings of the House by sponsoring various parliamentary interventions and/or contributing in the debates. The active lawmakers were from BNP-M, GDA, MMAP, MQM, PML, PML-N, PPPP and PTI. On the other hand, as many as 233 (68 percent) lawmakers including 189 men and 44 women did not participate in the proceedings throughout the session.