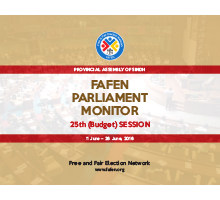 Nearly 46% of the lawmakers did not contribute in the budget debate during Sindh Assembly’s 25th session, says Free and Fair Election Network (FAFEN) in its session report.

Provincial Minister for Finance tabled the Sindh Finance Bill, 2016 during the first sitting which was passed by the House in the 11th sitting after discussion on the provincial budget for 33 hours and 30 minutes.  The House approved 149 demands for grants for the year 2016-17 and rejected 722 cut motions on them while 42 supplementary demands for grants for the year 2015-16 were approved by setting aside 114 cut motions on them.

The House witnessed low interest of lawmakers in Budget debate as 76 (46% of the current membership – 165) did not contribute in the debate. Eight of them were female legislators while 68 were male lawmakers. Five non-participating female lawmakers were from MQM and three from PPPP. Similarly, of the 68 male members not participating in budget debate, 45 belonged to PPPP followed by MQM (18), PML-N (3) and one each by NPP and PML-F.

Of the 89 members who took part in the budget debate, 67 were male and 22 female. However, the female lawmakers were found to be more active as compared to their male counterparts, as 76% (22 out of 29) of them expressed their views on the budgetary proposals while only 49% (67 out of 136) males contributed to the general discussion.

The House adopted two resolutions to end unannounced load-shedding in the province and condemn the murder of renowned Qawal Amjad Sabri.

The House witnessed two walkouts and six protest by the Opposition lawmakers. The MQM lawmakers walked out of the House during 3rd sitting for two minutes against registration of FIR against an ex-parliamentarian while entire opposition staged walk out for 26 minutes in 6th sitting for not allowing media to cover the proceedings live.  Six instances of protest within the House were witnessed for 38 minutes which were against objectionable remarks by treasury lawmakers, attitude of the chair, rejection of cut motions and demand of making new provinces.

The Chief Minister attended seven sittings for 43% of the proceedings’ time. The Leader of the Opposition attended 11 sittings for 69% of the proceedings’ time while the Finance Minister was present in 11 sittings for 99% of the total time. The Speaker chaired 62% of the session; the Deputy Speaker presided over 32% of the time; the panel of chairperson presided over 4% of session while the remaining time (2%) was consumed in a break. Among parliamentary leaders, the PTI leader attended all 11 sittings
followed by PML-F (10), PML-N (9) and NPP (7).