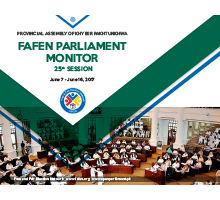 ISLAMABAD, June 18, 2017:  The lawmakers of the Provincial Assembly of Khyber Pakhtunkhwa (KP) expressed less interest in discussing various features of the Finance Bill, 2017 during the budget session, as 78 members did not contribute anything to the debate, observes Free and Fair Election Network (FAFEN) in its session report.

Provincial Minister for Finance tabled the KP Finance Bill, 2017 during the first sitting of the 25th budget session held between June 7, 2017 and June 16, 2017. The House passed the Bill during 6th sitting after holding discussion on the provincial budget for 16 hours and 27 minutes.  The Assembly approved 59 Demands for Grants for the year 2017-18 and rejected 722 Cut Motions on them, while 53 Supplementary Demands for Grants for the year 2016-17 were also approved by the House by setting aside 196 Cut Motions on them.

During the budget session, none out of 11 female lawmakers of the ruling party, PTI expressed their views on the fiscal document, followed by one each of JUI-F, PML-N, QWP-S, ANP and JI. Similarly, among 62 male lawmakers who did not take part in the budget debate, 33 belonged to PTI, followed by JUI-F (10), QWP-S (7), PML-N (5), JI and ANP (two each), Independent (2) and PPPP (one).

The House passed the KP Finance Bill, 2016 during the 6th sitting while the last sitting witnessed the passage of the KP Private Schools Regularity Authority (Amendment) Bill, 2017.

The session, comprising eight sittings, started on June 7 and ended on June 16. On average, each sitting started 19 minutes behind the schedule and lasted two hours and 48 minutes with 46 lawmakers (37%) present at the start and 50 (41%) at the time of adjournment.

The Chief Minister attended all the eight sittings that consumed 86% of the proceedings’ time. The Leader of the Opposition attended seven sittings consuming 88% of the sitting while the Finance Minister remained present during the entire proceedings. The Speaker chaired 84% of the session’s time and the remaining (14%) proceedings were presided over by the Deputy Speaker.

Among parliamentary leaders, the ANP and JI leaders attended eight sittings each, followed by QWP-S (6), PML-N and PPPP (4 each).

Only four Points of Order were raised during the session consuming 16 minutes of the session’s time. The House adopted a resolution to appoint female Professor as Head of Girls Khyber Medical College and to make amendments in the rules, if necessary.

The House witnessed four walkouts – two jointly by the opposition lawmakers, while one each by an Individual lawmaker and the PML-N legislators. The entire opposition walked out of the House for five minutes during the first sitting over the presentation of the budget and again for 10 minutes during the 4th sitting over the unavailability of the List of House Business.

A PTI lawmaker walked out of the House for 30 minutes during the 3rd sitting for not getting the development funds for his constituency. PML-N lawmakers also resorted to walkout during the 6th sittings when the Chair did not allow one of their colleagues to speak on the Demands for Grants.